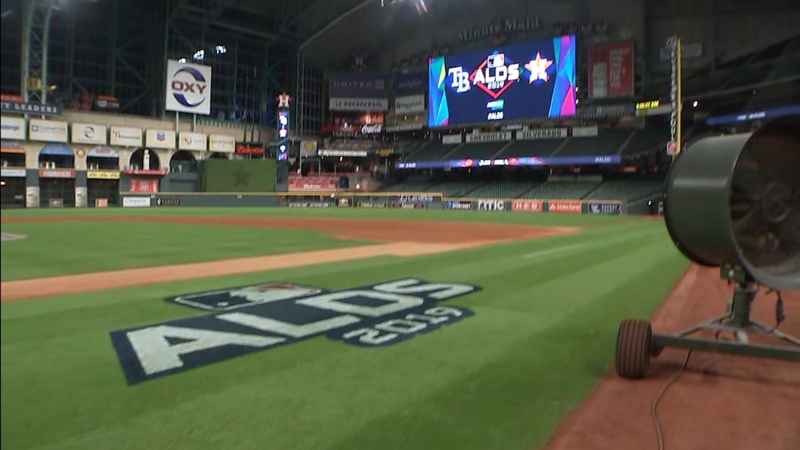 HOUSTON, Texas (KTRK) -- The Astros are putting out the call to turn Houston orange, as the team embarks on the postseason, starting with a homestand Friday and Saturday against the Tampa Bay Rays.

Had an awesome time this morning at @HoustonTX City Hall kicking off the 2019 Postseason! #TakeItBack pic.twitter.com/Pe8cZz8LVC

A postseason street festival will be held begining at 10 a.m. Friday outside of Minute Maid Park before Friday afternoon's game.

A festival will also be held before Saturday's game. The event includes live music, food trucks, photo booths and games, though a ticket to the game is required for entry.

The team store at the park is stocked with postseason merchandise, including an orange T-shirt with the message, "October Reign," and ball caps that read "Take It Back," referring to the World Series title.
Orange rally towels will be given to fans at each of the games, but the Astros are warning fans about traffic around Minute Maid Park, which, as expected, will be congested on both days.

Every postseason home game, the Astros will host a street festival for its beloved fans near Minute Maid Park on Crawford Street.

The festival will include live music, food trucks, photo booths, bar games and more. Fans must have a valid game ticket to attend the street festival.

Also, during every away game, fans will be able to cheer on the Astros at the Minute Maid Park Watch Parties.

Every away game will be shown on a video board in the stadium and on the Plaza on Crawford Street. To attend the watch party, fans must claim a voucher.

Gates for every watch party will open two hours before the first pitch.