PLAYOFF PARTIES: Where to catch the Astros action around town 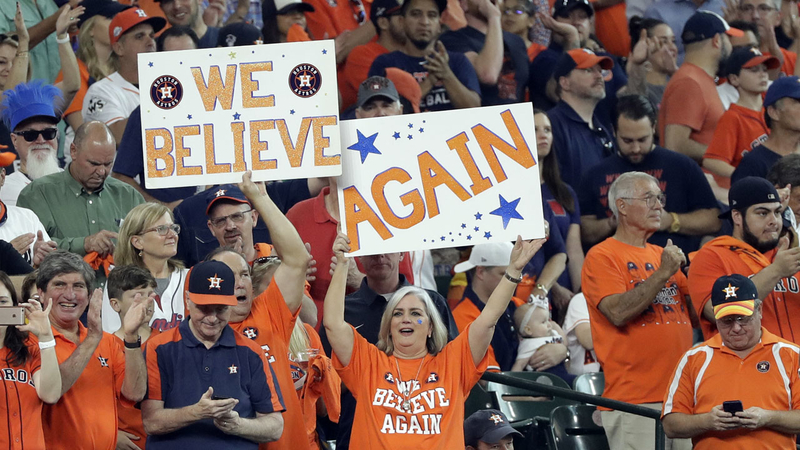 The Houston Astros are on the brink of sweeping the Cleveland Indians in the American League Division Series.

Even though the game is on the road today, fans can gather at Minute Maid Park to cheer on the Astros at a watch party after a memorable first two games of the series.

"Oh my God, it was so exciting," Cynthia Medina said. "Just energizing. It was wonderful."

From screaming alongside a sold-out crowd, to partying outside the stadium, just because the Astros are on the road doesn't mean the music goes silent.

"The atmosphere is phenomenal," Luke Markley said. "I think that Minute Maid is one of the best parks in the country."

The Astros are up 2-0 in the series, and though they're close to advancing to the ALCS, the players say they're not looking too far ahead.

"We play one game at a time, and you know, we don't take anything for granted. We are going to go up there with the same mentality and win on Monday and come back here to Houston," said second baseman Jose Altuve.

If you're interested in heading down to the ballpark for the watch party today, the gates will open at 10:30 a.m.

The party is free, but you need a ticket. You can get it online now, or they'll be available today at the box office.

Don't worry about it selling out. The Astros say no one will be turned away.

The Astros are on the brink of sweeping the ALDS. Here's where you can watch them this afternoon.

A fan fest will also take place outside with live music, the Astros' Shooting Stars and mascot Orbit. The team will sell food and merchandise as well, which is a perk you might want to take advantage of.


"Just to come see it," Lonnie Posey said. "It's a spectacle. It's really cool. They're going to go all the way again, you watch."

If the Astros lose Monday, the Astros will open Minute Maid Park for a Game 4 watch party on Tuesday.


A fan favorite and downtown staple, Lucky's Pub will be hosting playoff watch parties for EVERY game.

The bar will have tables and chairs setup with their jumbotron showing the game, but fans are also encouraged to bring their own chairs and seats.
There will be food trucks, food and drink specials, and swag available for purchase.

The always popular Saint Arnold Brewing Company already has your craft beer needs, but their big screen and beer garden will be showing all Astros playoff games!

Their menu features everything from fried chicken to grilled salmon, depending on your mood and dietary needs. Plus plenty of beer.