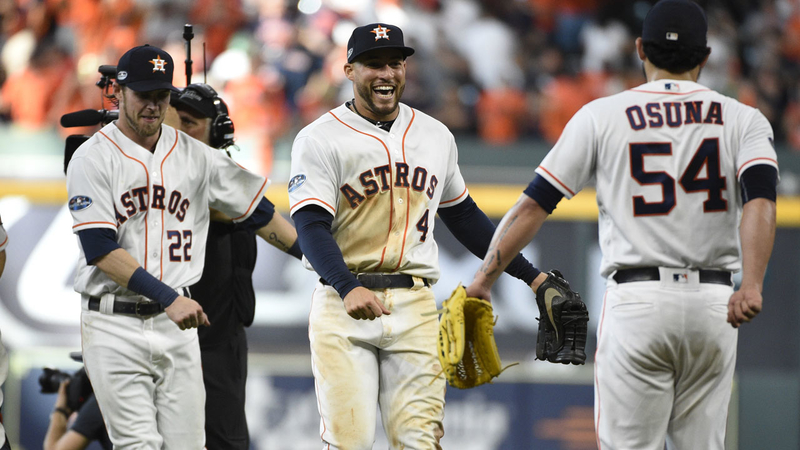 HOUSTON, Texas (KTRK) -- It took a few innings, but the bats finally got going.

On the strength of four solo home runs, the Astros defeated the Indians 7-2 to take a 1-0 series lead.

Justin Verlander started Game 1 and only went 5 1/3 innings, giving up two earned runs while striking out seven. For Cleveland, Kluber lasted 4 2/3 innings and was hit for four earned runs, striking out just two.

Astros closer Roberto Osuna finished off the 9th inning with one hit and one strikeout to seal the win.

Alex Bregman got the party started with a solo home run in the fourth inning to give Houston a 1-0 lead. Springer and Altuve followed up by hitting back-to-back jacks in the fifth, putting the 'Stros up 4-0.

RELATED: LIFE OF THE PARTY! Meet the man who bought his entire section beer during Game 1

The Indians eventually got to Verlander for a pair of runs in the sixth, but the Astros bullpen shut Cleveland down the rest of the way, as the Astros tagged on three more runs for the win.

These two went to every playoff game last year and plan to do it again this year.

Gerrit Cole will start Game 2 for the Astros. Cole went 15-5 during the regular season with a 2.88 ERA.