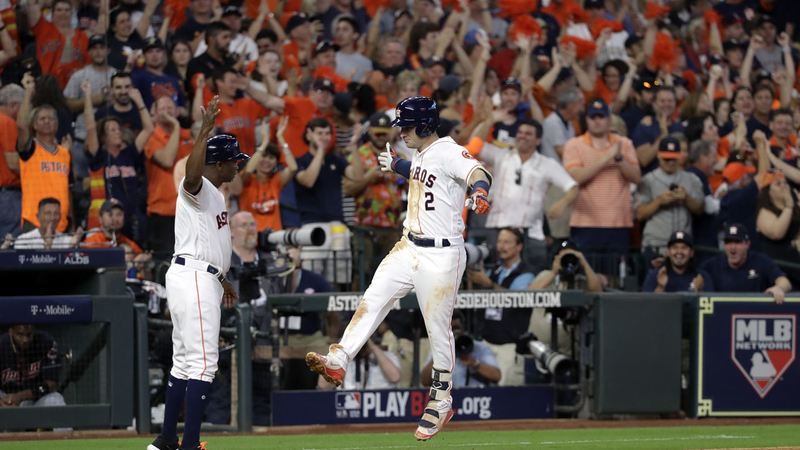 HOUSTON, Texas (KTRK) -- The Houston Astros race for a repeat continued Saturday, as the 'Stros defeated the Indians, 3-1.

Gerrit Cole drew the start for Houston and finished with 12 strikeouts over seven innings, with his only blemish being a solo home run by Indians shortstop Francisco Lindor.

Carlos Carrasco started for Cleveland and gave up six hits in 5 1/3 innings, before leaving the game with the Astros threatening. A 2-run double in the sixth inning by Marwin Gonzalez, off Indians reliever Andrew Miller, gave the Astros a 2-1 lead and put Cole in line for the win.

Then a solo home run to center by Alex Bregman put the 'Stros up 3-1.

Relievers Ryan Pressly and Roberto Osuna shut the door to give the Astros the win.

GAME NOTES:
Astros second baseman, Jose Altuve, came up limping in the sixth inning after a single down the left field line, but stayed in the game.

If hitting home runs was the gameplan, then Game 1 was a flawless Astros victory.

During the regular season, Cole had a 15-5 record to go with his 2.88 ERA. Cole also faced the Indians once in May, where he pitched seven innings and allowed three earned runs, but received a no decision. Houston eventually lost in 14 innings by a final score of 10-9.

For the visiting Indians, veteran Carlos Carrasco will take the mound. The 31-year-old right hander was 17-10 this season, with a 3.38 ERA.

RELATED: Meet the Astros fan who bought an entire section beer during Game 1

How much is 7 rows worth of beer at an Astros game? Eddie Flores found out.

WHAT TO WATCH:
Jose Altuve and George Springer are now tied with Carlos Beltran for the most home runs in Astros postseason history.