Astros on brink of elimination after dropping back-and-forth ALCS Game 4 vs. Red Sox 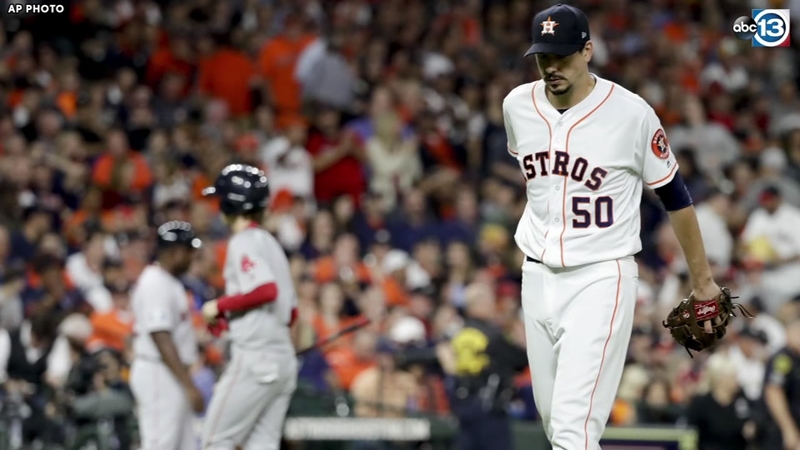 HOUSTON, Texas (KTRK) -- In a game that saw early drama and the bats wake up all over Houston's hitting order, the Astros dropped Game 4 of the American League Championship Series on Wednesday, 8-6, and are on the brink of elimination vs. the Boston Red Sox.

Houston got home runs from Tony Kemp and George Springer and two RBIs from Carlos Correa.

Astros pitching, though, may have done the team in. Starter Charlie Morton, who pitched for the first time since Sept. 30, gave up two runs to start the game. He gave up another run before being pulled with one out in the third inning.

Josh James relieved Morton, holding command for much of the three and two-thirds innings that he pitched. But he gave up four hits and three earned runs. One of the hits was a two-run home run to Jackie Bradley Jr., who blasted a grand slam in Game 3.

The Astros offense began the game with controversy due to a questionable fan interference call off of what could have been a Jose Altuve home run to tie the game in the first inning. Mookie Betts made an attempt at the wall for Altuve's fly ball with his glove flying towards awaiting fans.

Of the catch, Astros manager A.J. Hinch had this to say after the game:

"I saw fan interference. I've had this a couple times, we have as a team. They deemed the fan reached into the field of play, interfered with [Mookie] Betts. Jose [Altuve] pays the biggest price because the trajectory of the ball looked like it was going to leave the ballpark. But we assume and you can assume a lot with Mookie [Betts] because he's an incredible athlete, but we assume that he's going to make this spectacular catch jumping as high as he can into the crowd. I asked for a review and obviously they're gonna give it to us and they reviewed it and came back with the same outcome. Once the fan reaches past that line of the fence, we're gonna penalize hitters every time....and you know, change that whole inning."

Houston sends Justin Verlander to the mound in what could be the Astros' final game of their World Series title defense season. Game 5 is scheduled for a 7 p.m. first pitch on Thursday.

Astros GM Jeff Luhnow addresses allegations of camera use during the postseason after MLB cleared the team of cheating.

From Houston to Boston, fans are excited to see the Astros take on the Red Sox at Fenway Park.