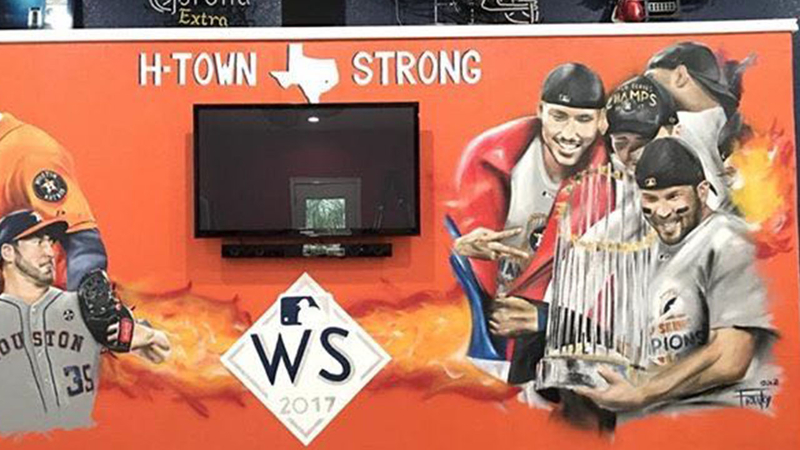 HOUSTON, Texas (KTRK) -- A Houston artist, known for many of his sports-themed pieces, created another one that any Houston Astros fan would love to have.

Franky Cardona is a self-taught artist and has been painting and drawing since he was a child.

You may have seen some of his work.

He even did one for future hall of famer and G.O.A.T former Houston Texans wide receiver Andre Johnson.

But one of Cardona's best and most special pieces was the one he did last year in Home Run Alley at Minute Maid Park.

"I wanted to go with a past and present theme that had an artistic street vibe to it," Cardona said.

The mural includes a few of your favorite Astros players: Jeff Bagwell, Craig Biggio, Jose Altuve and Carlos Correa with the words "Work for it" at the top.

He said he didn't realize the Astros would end up winning the World Series in 2017, but it makes that mural extra special. The championship fever hasn't gone away for many fans.

Recently he started on a project for a client's man cave that gives the room an H-town vibe.

"He wanted a painting representing Houston, so he decided to go with World Series," Cardona said. "I told him to leave it up to me and allow me to have creative freedom, and I'll deliver and awesome piece."

Cardona is proud of what he's done with this piece and it's extra special because it's centered around a team that gave the city life after the devastating hurricane.