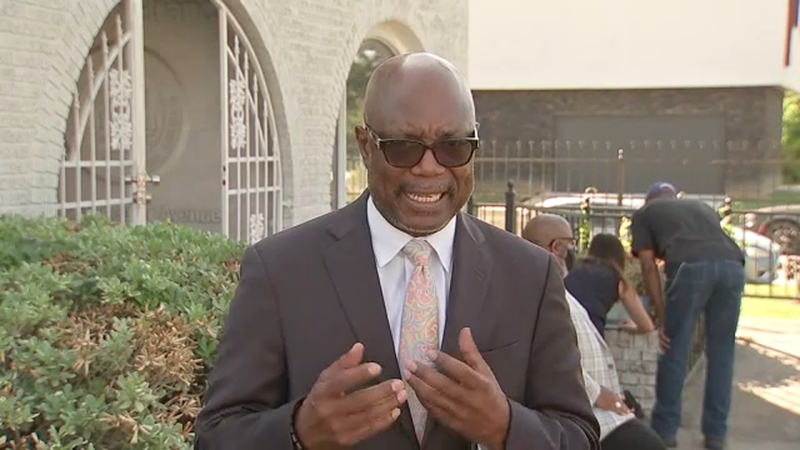 HOUSTON, Texas (KTRK) -- After a jury found former Minneapolis police officer Derek Chauvin guilty in the death of George Floyd, Houston-area leaders are speaking out, with some calling this trial a "defining moment."

"Justice is a process and these jurors showed tremendous courage in reaching a just verdict," Ogg wrote. "Millions saw the video, which we all found devastating. Our thoughts are with the family and friends of George Floyd, a Houston son whose murder is a defining moment in American criminal justice."

Harris County Judge Lina Hidalgo also weighed in and said that while the justice system served its purpose, there's still much more work to be done.

"As George Floyd's hometown, the people of Harris County continue to feel his loss deep in our hearts. His family, his neighbors, his classmates and his community will never forget his death and what it represents," Hidalgo said. "While the justice system served its purpose today, there's much more work to be done toward a smarter and fairer criminal justice system. George Floyd's legacy will be with us every step of the way."

As George Floyd’s hometown, the people of Harris County continue to feel his loss deep in our hearts. His family, his neighbors, his classmates, his community, will never forget his death and what it represents.

WATCH: See the moment Floyd's family got justice for their loved one
EMBED More News Videos

Hugs, tears and screams -- watch the moment George Floyd's family got justice for their loved one. Former Minneapolis police Officer Derek Chauvin was found guilty on all counts and could be sent to prison for decades.

"Today's verdict may not undo generations of unequal treatment under our nation's legal system. But it does show we are making real progress toward a system that everyone can trust to produce real justice," Gonzalez wrote.

Today’s verdict may not undo generations of unequal treatment under our nation’s legal system. But it does show we are making real progress toward a system that everyone can trust to produce real justice.

State Rep. Senfronia Thompson, who is one of many representatives working to pass the George Floyd act, called Tuesday's verdict a historic day in the criminal justice system and is relieved there will be some accountability held in the death of Floyd. Read her full statement below:

"Today is a historic day in our criminal justice system, and I am relieved there will be accountability for the senseless murder of George Floyd. My prayers are with his family, and the families of those who have been killed by police brutality. While we praise this verdict, we must also give pause, because we all know it could have just as easily gone the other way. Too many crimes have gone unanswered, too many deaths without justice. For George Floyd, for Breonna Taylor, for Tamir Rice, for Jamail Amron, for Daunte Wright, and for too many other of lives lost - we must use every ounce of our power to end police brutality. While today is historic, we must face the reality that the nation and this state still need police reform to prevent officer misconduct and lives from being cut short. The George Floyd Act was heard in a public hearing but was left pending in the House Committee on Homeland Security and Public Safety. I'm deeply committed to continuing the fight to get all of the reforms within House Bill 88 passed this legislative session."

Houston Mayor Sylvester Turner and Houston Police Chief Troy Finner held a news briefing shortly after watching the verdict and called stated that "justice has been served" with this verdict.

"The jury has spoken, but now it's also time for our country to reach deep down and find a way to move forward. Because as we deal with issues on multiple levels, we need our law enforcement agencies and communities to be working hand in hand, in the best interest, and the best interests of the people that we have that we serve," Turner said. "This is not one of those moments where you can say we've accomplished our mission, or mission accomplished anything like that. It's not a time to jump up and down. It is a time to be very reflective and to ask, 'What can we do collectively each and every one of us?'"

Like Turner, Finner added that Tuesday's verdict is not a celebration but a day reflection and healing.

"It's a day of reflection, but it's also a day of healing, and a message to everyone that no one is above the law and expressly, those of us who taken over and swore to uphold the law and protect one another," Finner said.

"Justice has been served," Houston Mayor Sylvester Turner said after a jury found former police officer Derek Chauvin guilty on all counts in the death of George Floyd.

Harris County Precinct 2 Commissioner Adrian Garcia said he applauds the jury for making the right decision. Garcia also expressed the importance of communities and law enforcement's commitment to working together on a path forward that will bring change. Read Garcia's full statement below:

"I applaud the jury making the right decision and confirming what so many of us around the country witnessed for ourselves. Derek Chauvin faced a jury truly representative of his peers and had a strong defense. The justice system has worked in this case, and we can feel confident in the verdict. The fact that members of Derek Chauvin's own department testified that he was out of line, makes a more than compelling case for his guilt. These officers helped hold a bad actor among their ranks accountable. Law enforcement must strive toward accountability to build trust with the community, or the unrest we have seen in recent years will continue. As someone who has worn a badge and uniform for nearly 30 years, these cases that cause distrust of the diverse women and men who put their lives at risk daily, are always painful. However, to have a verdict like this, when there's overwhelming evidence, is critical to prove that we can hold those who violate the public trust accountable for their actions. Looking ahead, it is important that our communities and law enforcement commit to working together on a path forward that will bring meaningful change."

On May 25, 2020, the world watched in sadness, anger, and disbelief at the heinous murder of George Floyd at the knee of Derek Chauvin. As family, friends, and loved ones grieved, his death sparked a global movement as millions of people spoke out against systemic racism and leading the call for social justice. Today, a jury of George Floyd's peers, following weeks of viewing disturbing video footage, listening to witness and expert testimony presented by both the defense and prosecutors, took less than 24 hours to find Derek Chauvin guilty on all counts for the murder of George Floyd. While no verdict can bring George Floyd back or heal our nation, this verdict is a necessary step on the road to progress, addressing racial inequity and racial bias in our criminal justice system.

We respect and support our men and women in uniform who put themselves in harm's way to protect us every day. However, we cannot support those who operate in bias and without regard to human dignity. George Floyd was laid to rest in Fort Bend County, the most diverse county in America. In our efforts to make our community the shining example of inclusion and belonging, let us continue to work together against discrimination or bias of any form.

Houston Congresswoman Lizzie Fletcher shared a statement in which she said she hopes Tuesday's conviction will ease some of the pain for Floyd's family and bring a sense that justice is possible.

"Today's verdict convicting Derek Chauvin of murder is an important step for justice, after a year in which we have seen so many failures of justice. While the jury's verdict will not bring George Floyd back to life, I hope today's conviction will ease some of the pain for his family and for all Americans, and bring a sense that justice is possible," Fletcher wrote. "We have much work to do to ensure justice for all Americans. Justice and progress require constant engagement and real commitment to doing the work we must do to improve our laws, our law enforcement, and to confront our country's history and the systems around us that perpetuate inequality and injustice, especially in communities of color. This work can and must be done, and now is the time to do it."

But it wasn't just local leaders pouring out their expressions on the verdict. The Houston Food Bank also took to social media, calling this trial "a step toward addressing long-standing systemic racism but there is more justice to be served."