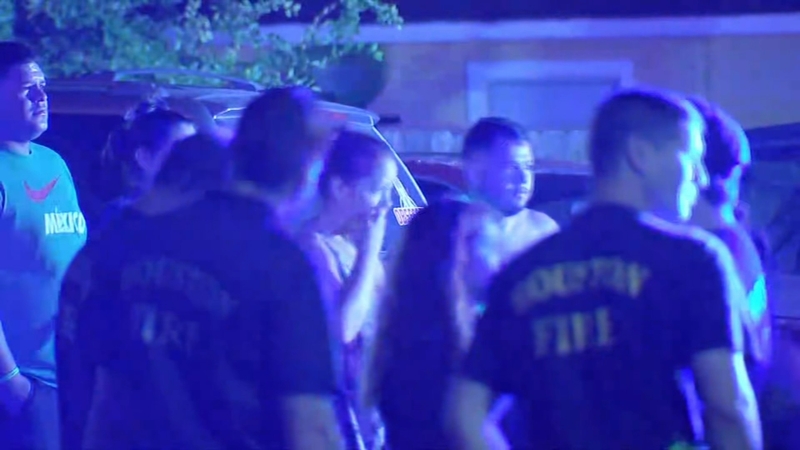 HOUSTON, Texas (KTRK) -- Police say six people were shot at a house party in east Houston that formed after it was posted on Snapchat.

It happened on Mylla Street, near Galena Park and Jacinto City, around 2 a.m. on Saturday. It's unclear what caused the shooting, but a detective on the scene told ABC13 it began as a verbal altercation at the party.

Police say three people were found shot at the home when they arrived. Several people tried to get away from the shooting and took off in a car.

Police say the suspect began following them down the East Freeway and shot inside their car, striking three additional people.

The victims managed to pull over near the East Freeway and McCarty Street to get help.

The house party included between 30 and 50 guests and were all teens and young adults, according to police.

Police say it was an "instant party" in which invitations are sent at random via Snapchat, a messaging app that allows users to exchange pictures and videos, commonly referred to as "snaps", that disappear after they're viewed.

Police believe there were up to three shooters involved. They described the suspect's vehicle as a tan, newer-model SUV, larger in size.

All six victims suffered non-life threatening injuries and are expected to survive.

People who live in the neighborhood told ABC13 they heard between 20 and 25 gunshots.

Witnesses say a shooting victim showed up at a gas station a few blocks from the scene looking for help.

A car was seen outside the home with a shattered windshield.

Carlos Ramirez said he heard a young woman crying outside of his home and yelling on the phone. He learned she had been shot in the hand and called her an ambulance.

"I came outside and I heard this lady crying and she was yelling on her phone so I peeked and looked and the gunshot was going on. I told her to come inside and wash her hands because you don't know if the people are still out there," said Ramirez.

The incident remains under investigation. Police say they have no leads on a suspect or suspects and are looking to speak with anyone who attended the party.

Anyone with information is asked to contact Houston Police.
Follow Mycah Hatfield on Facebook and Twitter.
Report a correction or typo
Related topics:
houstonhouston police departmentwoman injuredshootingpartyinvestigatorsinvestigationpoliceinvestigationssnapchat
Copyright © 2022 KTRK-TV. All Rights Reserved.
TOP STORIES
Daylight shows home destroyed after standoff with shooting suspect
What we know about man accused of shooting 3 HPD officers
Suspect arrested after 30-minute chase ends on I-45 in Texas City
Clouds clearing today, sunny through the weekend with rain next week
5 people charged in connection with Pct. 5 corporal's murder
How many times can I reuse my N95 mask?
Decades after TV anchor disappears, convicted rapist denies connection
Show More
Driver dies after slamming into 18-wheeler's trailer on US-59
Woman shot in the shoulder during robbery set up in SW Houston
Prepare for a major closure at I-69 and 610 West Loop this weekend
Officers escort body of corporal killed in ambush to funeral home
ABC13 obtains HPD scanner traffic of chase that led to shootout
More TOP STORIES News