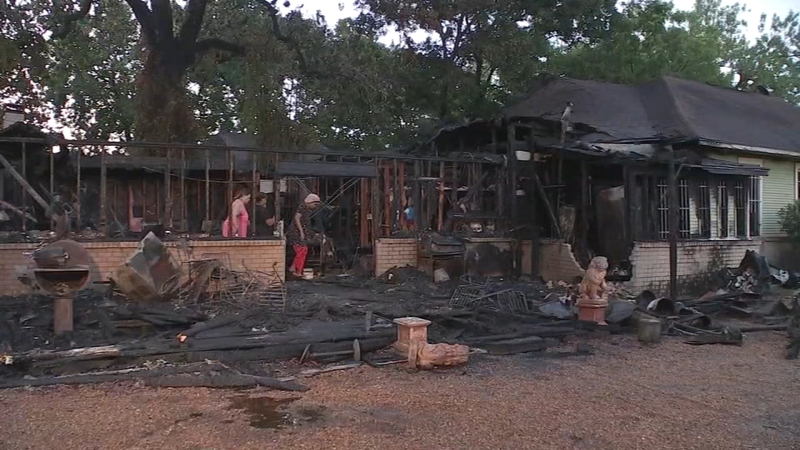 Family loses everything in fire in N. Houston

HOUSTON, Texas (KTRK) -- A family lost everything, including their two young daughters' school clothes and supplies, in a house fire early Monday morning in north Houston.

The Houston Fire Department was called to the home in the 200 block of Noras Lane near North Main Street around 3 a.m.

The father says he left a brisket smoking on the pit, which is a permanent part of the home built under the back deck, and believes that may have caused the fire. He said he put a final log in the pit and went to bed.

"That was everything I had," homeowner Norris Alexander said.

The family has lived in the home for 18 years.

"I heard it go 'Boom,' and it got real bright," said Barry Tisdale, who lives in a travel trailer near the home. He saw the flames shooting into the sky and sprang into action.

That's when Tisdale ran to the windows and yelled to his friend to wake up. "I ran over to the house and tried to get them awake, so they can get out and my first thoughts were, 'They weren't responding.'"

The home has burglar bars. Tisdale said he was going to use his truck to pull the front door off its hinges, but the family finally made it out safely.

"He was beating on the back part of my house by the bedroom. We were sleeping, kept hearing his voice. By the time I got up, the whole back part of the house was on fire," Alexander said.
Everyone escaped without injuries.

"It's just scary, but I'm blessed that I got out the house in time, and not only me, but my family, too," said 14-year-old Narissa Alexander.

She and her 8-year-old sister will start school next Monday.

"Heartbroken. I feel heartbroken," said mom Nichelle Alexander. She said she spent $200 on her daughters' back to school clothes.

The American Red Cross has been called to help since the children lost their clothing and school supplies.

Firefighters say never leave cooking food unattended, whether it is on the grill or in your kitchen. They also recommend that outdoor cooking devices like smokers are at least 10 feet from any structure on your property.

A GoFundMe page has been launched to help the family recover.