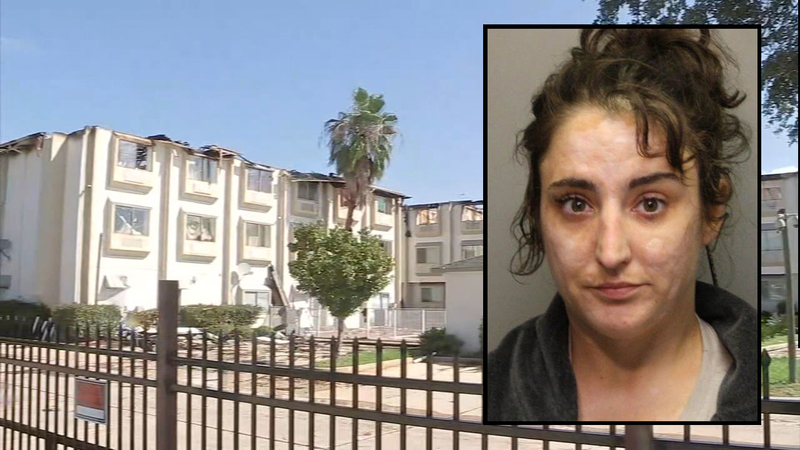 SPRING, Texas (KTRK) -- The mother of two children who were left alone in a Motel 6, sparking a massive blaze, says she is not angry with her friend who was supposed to be watching them.

"I'm not angry at her. She's still my friend, she's not a bad person at all," Dayeisha Finley said.

Finley's two children, 3 and 6 years old, were with her friend Tara Piccione the day a three-alarm fire broke out Wednesday at the Motel 6 off I-45 and Cypresswood.

Piccione is now wanted by the Harris County Fire Marshal's Office for the fire. She is charged with abandoning a child with intent to return.

"Tara called me and she was, I couldn't understand nothing, she was all over until she said 'I just believe I'm going to jail,'" Finley said.

The mother of two says she has only known Piccione for six months, but says the two grew close very quickly and her children see her as an aunt figure.

WATCH: Families wait for refunds after motel went up in flames

She says her two children spent the night with Piccione Tuesday. When they woke up hungry on Wednesday, Finley says Piccione left to get them a pizza.

Investigators say she left two children in a third-story hotel room and walked to Brother's Pizza nearby.

"My daughter told me that after Tara left, she looked up and her brother had a lighter. I said 'Why didn't you take the lighter from him? Y'all known you're not supposed to play with lighters or whatever.'"

Finley says the lighter set a bed sheet on fire. The kids ran from the room, and the blaze quickly spread.

It ripped through the Motel 6, leaving more than two-dozen families who lived there homeless.

"Of course she didn't mean for none of this to happen," Finley said. "I do hope that everybody that did lose something, I do apologize on my son's behalf. Kids are going to be kids, they're going to be curious."

The children were taken to the hospital for smoke inhalation. Finley says they are doing well.

She is now worried for her friend, who she says meant no harm.