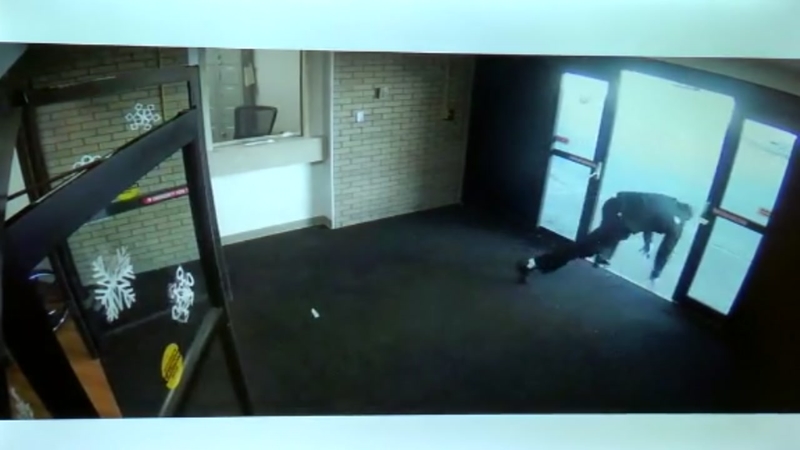 CINCINNATI, OH -- A man carrying two handguns who tried to storm into an Ohio hospital's psychiatric emergency room shot and wounded a security officer, fired at a police officer and then fatally shot himself, police said Thursday.

Some of the drama that unfolded at the University of Cincinnati Medical Center complex was captured on surveillance video and 911 recordings.

"We have a shooter here. ... I'm hiding under a desk. Hurry!" a psychiatric services employee reported during a 911 call.

Isaac said police had not yet determined Currie's motive but said he had a criminal record, including drug charges, resisting arrest, assault on a corrections officer and an earlier assault on a UC Health security officer.

Shortly after entering the building Wednesday, Currie struggled with the security guard and fired shots. The guard then ran out of the building. Currie followed him. Video shows the man identified as Currie striding outside before apparently spotting the security officer and then running after him, firing more shots. The officer received two gunshot wounds to the torso.

Currie returned inside the hospital. He had left his car keys and he returned to the emergency room lobby to retrieve them, walking at a steady pace and still holding a gun in each hand.

A Cincinnati police officer on security duty at a nearby medical building rushed into the emergency psychiatric services wing, drawing a gunshot from Currie. The shot missed. After ducking and retreating, the officer, Bob Nelson, regrouped with other officers outside and moved in on Currie.

Currie killed himself with a single gunshot.

Isaac said Nelson's actions "and the action of the other responding officers was nothing less than heroic, along with the actions of the security officer."

He also praised the UC Health staff, which locked down the emergency room before Currie returned.

"He was not able to penetrate," Isaac said.

He said he didn't have details on Currie's mental health condition. He said Currie was armed with 9mm and .22-caliber handguns, at least one of them stolen.

Hamilton County court records show several recent cases for Currie, including a felonious assault charge Nov. 2 for allegedly firing a semi-automatic rifle repeatedly into a public park, wounding a man. Court records show a grand jury declined to indict him in that case, but Currie was then indicted on charges of assaulting a corrections officer and obstructing official business on Nov. 12. The records show a Hamilton County deputy said he opened Currie's cell door to give him his dinner, and Currie charged him, punched him in the face, and then tried to throw him over a railing. Two other officers helped subdue Currie, they said in their statements.

Court records show Currie was released on $75,000 bond last week in that case.

The attorney who had been representing Currie in the case called the shootings "tragic." Attorney M.J. Hugan said Thursday that she didn't know why Currie was at the Cincinnati hospital on Wednesday. She said he was scheduled for a pretrial hearing in January.

Hugan said that she knew Currie had a mental health history but that he seemed very stable and coherent when she saw him at the Hamilton County Justice Center. She also said that a corrections officer she talked to when she went to see Currie told her they hadn't had any problems with him other than the alleged assault that resulted in the charges.

"I didn't have grave concerns for his mental health," Hugan said.

She said that Currie's family is "devastated" by his death and very concerned about the security officer who was shot.

"Something went terribly wrong," she said.