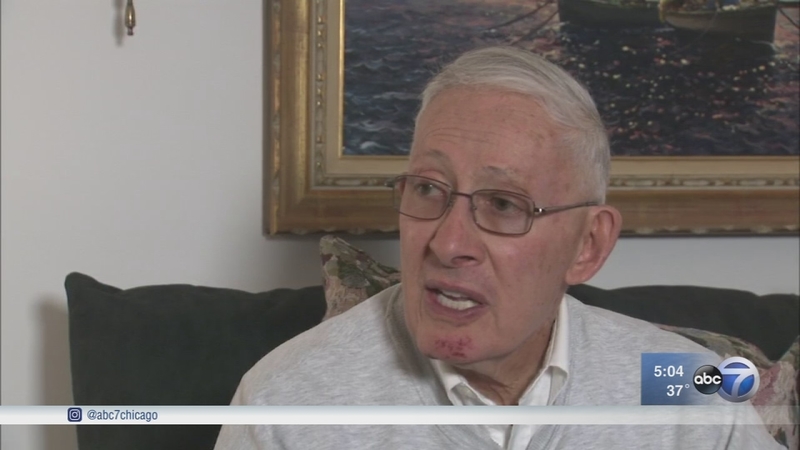 HOMEWOOD, Illinois -- A Good Samaritan helped rescue the mayor of south suburban Homewood after he fell through thin ice trying to save his dog from a freezing lake.

Mayor Richard Hofeld and his wife were walking their dogs at a nature preserve Sunday when their dog Annie ran onto a body of water that had frozen over. Annie fell through the ice.

"There had been a shelf of ice from the shore about 30 feet out, and beyond that was open water and she had gone across that shelf of ice and was in the water," Hofeld said.

As the mayor tried to rescue his pet, he also fell into the icy water.

"I took off my winter coat and I walked across the ice the best I could, and I had a hold of her collar and the ice gave way and the two of us went under," he said.

Hofeld was able to save his dog, but couldn't get himself out. The couple had left their cell phones in the car, so Hofeld's wife had no way to call for help.

A passing jogger heard the commotion and called 911.

"He tried to knot together the clothes; my wife's jacket, my jacket that I had taken off, his coat, and he tried to throw it to me as a rope and I finally got it but I couldn't get out of the water, just couldn't do it," Hofeld recalled.

Homewood firefighters responded to the scene with the dive team and rescued the mayor. He had been in the water for about 20 minutes, officials said.

Hofeld was taken to Advocate South Suburban Hospital in nearby Hazel Crest where he was treated for hypothermia and minor scrapes and bruises. He was held overnight for observation and released Monday.

Hofeld said he's alive and well, all thanks to that mysterious jogger.

"He really saved my life. I don't know what we would have done had he not shown up," he said.

The mayor also stressed how important it is for people to bring their cell phones on walks, in case of emergencies like this one.