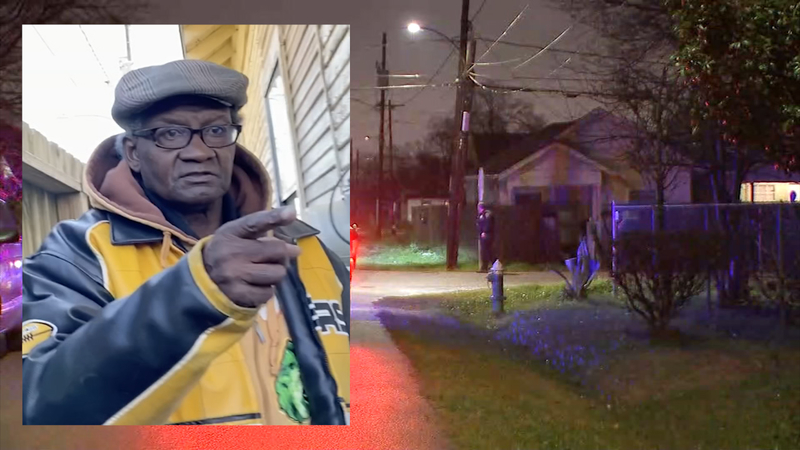 HOUSTON, Texas (KTRK) -- A theft suspect was shot in the back in the early morning hours Thursday after a homeowner confronted him.

It happened on Capron Street in Fifth Ward. Homeowner Clifford Russaw spoke exclusively with ABC13, saying he always keeps his guard up, but never needed his gun until he heard someone pulling out his window air-conditioning unit around 1:30 a.m.

"These are some bold people," Russaw said.

Russaw said he keeps a gun on his nightstand and found himself reaching for it when he was woken up by the sound.

"He stuck his hand on the inside, and I saw him pulling on it. Well, I came through there and I came out the door with my pistol," he said.

Russaw said it was when the man ran to the front of the house to leave that he took a shot into the dark, and ended up hitting the man in the back.

"When he was trying to get away, that's when he got shot."

The man who was shot is stable and will recover, and no charges have been filed, according to the Houston Police Department.

A spokesman said there are two investigations ongoing now: one looking at potential theft charges and the other investigation by the HPD Major Assaults Division, looking into the shooting.

"We'll work with the D.A.'s office and figure out what we'll do from there," Lt. R. Wilkins said.

When asked if he had regrets, Russaw said he saw no other option but to shoot.

"You don't know if they got a gun or not, and there's no sense in you trying to take that chance," he said.

A Harris County District Attorney's Office spokesman said they have not yet received filings on this case from police, but incidents of this type often land in front of a grand jury.