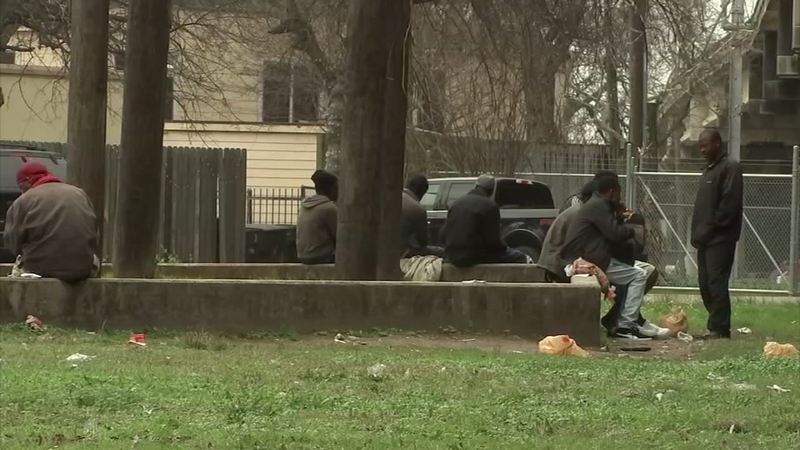 HOUSTON, Texas (KTRK) -- You've likely noticed it on your commute to work and even on the edges of your neighborhood.

Encampments of tents, cardboard boxes, and strewn sleeping bags can be seen under freeways, in parks, and sometimes steps away from residential properties.

To some, Houston's homeless problem is heartbreaking.

"I think the fact that it's unsightly is an urgent reminder to our neighbors that some of our neighbors are living in this condition," said Omar Afra, a Montrose resident sipping his morning coffee not far from a Fiesta grocery store and a long-standing homeless encampment. "I don't think it's something that we should be able to put blinders on and not see."

For others who live near it, the eyesore can be frustrating. The complaints fill social networks like Nextdoor. So, it's hard to believe homelessness in Houston isn't getting worse.

In fact, the Houston Coalition for the Homeless says Houston, the rest of Harris County, and Fort Bend County have seen a 60 percent drop in overall homelessness since 2011.

"We also have more people who are seeking shelter these days than are staying on the streets, and it used to be the opposite," said Eva Thibaudeau, vice president of programs with the Houston Coalition for the Homeless.

As a response, advocates have worked together to put coordinated services where people are.

"We used to make people who are experiencing homelessness travel a 42-square-mile footprint to try to get breakfast, lunch, shelter, health care, and what we've done has been able to really shrink that," she said.

Still, in the shadow of groups willing to help, many prefer an overpass to a night sheltered. Mental illness, pets, family situations, and drugs keep some homeless from taking emergency shelter.

A trim 66-year-old, Tommy walks the perimeter of a homeless encampment in Midtown looking for enough money to purchase a new Texas ID card so he can get a job. He says he once had a problem with crack. Now, the veteran is working to stay clean, sleeping in a sleeping bag under the freeway, too proud to accept help.

"I'm waiting to get my own and I just really don't want to be a bother to anyone else," Tommy said.

It's difficult work getting people to do something they don't want to do.

"Sometimes it takes one time, two times, three times to come out, even more to convince people or, at least, motivate them to actually want to get off the street," said Joe Fuentes, CEO of Avenue 360 Health and Wellness.

For those who are willing to accept help, Avenue 360 works with other community services to combine healthcare with affordable housing residences to get homeless off the street and living on their own.

Sitting in the courtyard of the New Hope House on West Rittenhouse Street in north Houston, Fuentes says these combination residences are safer and certainly less unsightly than a camp. Still, he's gotten push back.

"Not in my backyard," some have said to the affordable housing communities popping up all over Houston.

"These are not places that are just a dump, that they are not just a dumping ground for people," Fuentes wanted others to know. "These are places where communities thrive."

Advocates say more funding is needed for affordable housing and they ask that employers give homeless, like Tommy, a second chance.

"I want everybody to understand that, hey, life is simple. It's up to you how you make it," Tommy said. "Ten percent is what life does, another 90 percent is how we react to it, that's it."

Shortly after saying that, he took off down Fannin Street, determined to find the money for an ID card, to apply for a job, and finally end his nights sleeping on the street.

Who are the homeless in Houston?

According to the Coalition for the Homeless, 2,287 homeless individuals in Harris County were sheltered in the 2017 count. That amount is out of the 3,605 total people counted in Harris, Fort Bend, and Montgomery counties.

Here is a breakdown of the sheltered and unsheltered homeless people in each county:

The city says crews have worked to clean up homeless encampments to keep them from becoming a health risk.

Mayor Sylvester Turner has proposed turning a METRO site into a "low barrier shelter" that would provide a safe sleeping program and basic needs.

Turners proposal follows an existing program in the heart of San Antonio: Haven for Hope. In the video below, an Eyewitness News report from February 2017 explains how it helps the homeless become more willing to help themselves.