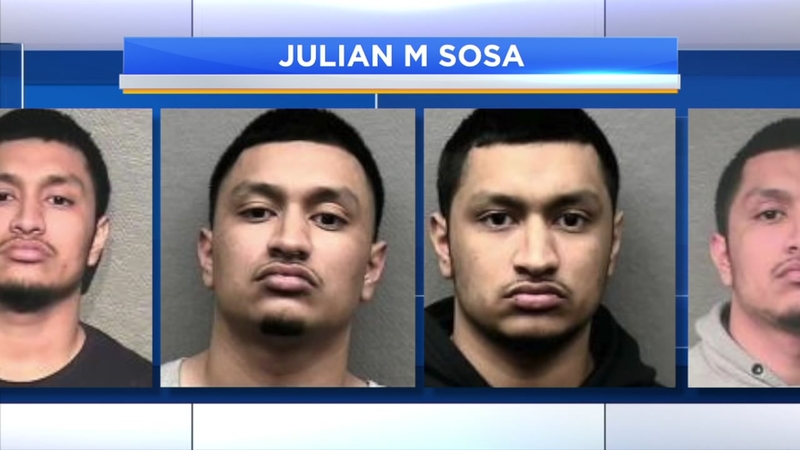 HOUSTON, Texas (KTRK) -- The bond has been set at $1 million for the man charged with hitting and killing a homeless woman while trying to flee deputies early Sunday in north Harris County.

The charges were read against 22-year-old Julian Marcelino Sosa in court overnight. He did not appear due to medical reasons.

The Harris County Sheriff's Office tells Eyewitness News the chase began during a traffic stop for reckless driving on I-45.

The Harris County Sheriff's Office tells Eyewitness News the chase began around 5:55 a.m. Sunday during a traffic stop for reckless driving on I-45.

According to Harris County Constable's Precinct 1 Office, Sosa did not stop, reaching speeds of at least 100 miles per hour on the freeway.

Authorities say Sosa exited near Rankin and lost control, going across all the lanes and hitting a homeless woman underneath the overpass.

He allegedly ran her over while she was sleeping.

Officials say Sosa attempted to run away from the scene but was found a quarter-mile away. He was arrested.


A small memorial is growing where the woman was killed. A friend of hers told Eyewitness News that she was a wonderful woman trying to make it through some tough times.

"This caught us off guard. I mean obviously, where she's sleeping at you don't expect it. I mean you got a pole here, a pole there. You don't expect someone to come through and take you out," said the victim's friend, who goes by the name "Country."

Investigators say Sosa was intoxicated. During an inventory of his vehicle, deputies say a handgun was located.

In court, it was revealed Sosa had a previous felony on his record: a 2014 burglary conviction.