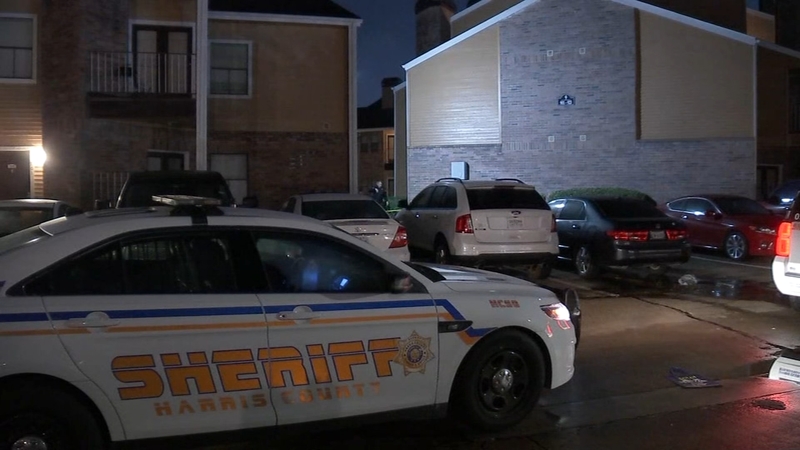 HARRIS COUNTY, Texas (KTRK) -- A man who did a good deed was hit over the head with a gun and his apartment guest was shot during a home invasion overnight.

The intruders are on the run after wreaking havoc inside the man's apartment in the Mission Bend area of southwest Harris County.

Harris County sheriff's deputies responded to a reported shooting at an apartment complex located on Empanada Drive near Golden Star around 3 a.m. Wednesday.

The man who lives at the apartment told detectives he woke up to two guys wearing masks rummaging through his dresser drawers. He tried to stop them, and that's when he was attacked.

Investigators say the intruders pistol-whipped the resident, who's in his late 70s. As he was attacked, his friend, who had been asleep on the couch, woke up.

@HCSOTexas units are investigating a shooting that occurred inside an apartment unit at 14501 Empanada Drive. Preliminary info: two unknown males entered the unit and attacked two residents; one male resident was pistol-whipped (minor injury) and his roommate was shot. The pic.twitter.com/3RJrGc3N9O

The intruders shot his friend once, possibly twice, as they ran out the door, deputies said.

That man shot is homeless, according to the elderly man who lives at the apartment. Investigators say he knew the homeless man for close to a decade and invited him to crash on the couch.

They think the homeless man didn't lock the door, and that's how the intruders got in. There's no sign of forced entry, according to deputies.

A man was shot during a home invasion at an apt complex in the Mission Bend area (sw Harris Co). Another guy—who lives here—was pistol whipped, according to HCSO. Shooter ran—no arrests at this point. #abc13 pic.twitter.com/sisX6Ey4Gs

The man shot was transported to the hospital. Officials say he has serious injuries but is stable after surgery. He has possible internal bleeding, but he's expected to pull through.

Investigators do not have much of a description for two intruders, who they say were wearing masks.