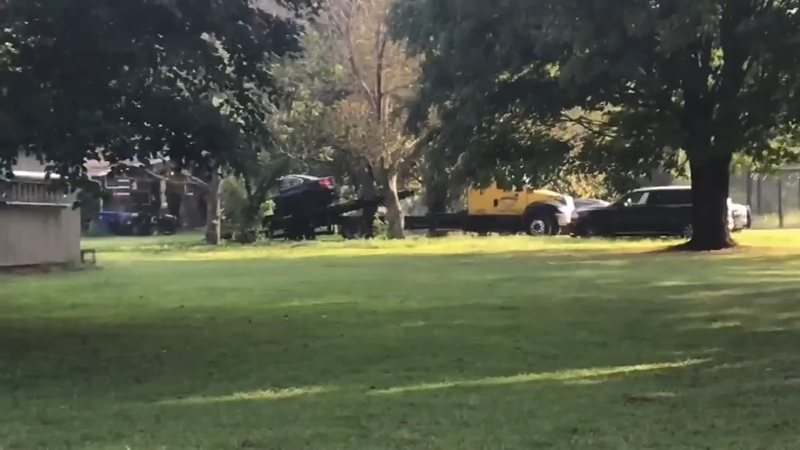 PHILADELPHIA, Pennsylvania -- Investigators are executing a search warrant at the home of the New Jersey couple who have been accused of defrauding a homeless Philadelphia man of $400,000 from a GoFundMe account.

The Action Cam on the scene just after 8 a.m. Thursday showed a BMW in the driveway being loaded onto a truck outside the Burlington County home of Kate McClure and Mark D'Amico.

All GoFundMe money is gone, attorney for homeless man says. Chad Pradelli reports during Action News at 4:30pm on September 4, 2018.

The attorney for the homeless man, John Bobbitt, said he learned from the couple's attorney that the money is all gone.

On Wednesday, Judge Paula Dow told the lawyer for McClure and D'Amico that she had a number of questions about the case and wanted to see the defendants herself. The couple also must give depositions about the money that was raised for Bobbitt.

The judge also ordered the attorneys for both the couple and Bobbitt to get their paperwork in order, and figure out the money trail to see who spent what on both sides.
EMBED More News Videos

McClure and D'Amico started a GoFundMe account to help Bobbitt, who spent his last $20 to help McClure after she ran out of gas on I-95 last year.

The total amount raised would have been $360,000 after GoFundMe's fees.

The couple claimed through their attorney they gave Bobbitt $200,000. Bobbitt pinned the figure at $75,000 in cash, goods and services.

He alleges the couple spent much of the donations on lavish trips, shopping sprees, gambling, and a used BMW.

McClure had no comment as she drove off in that BMW from her Florence Township property on Tuesday.