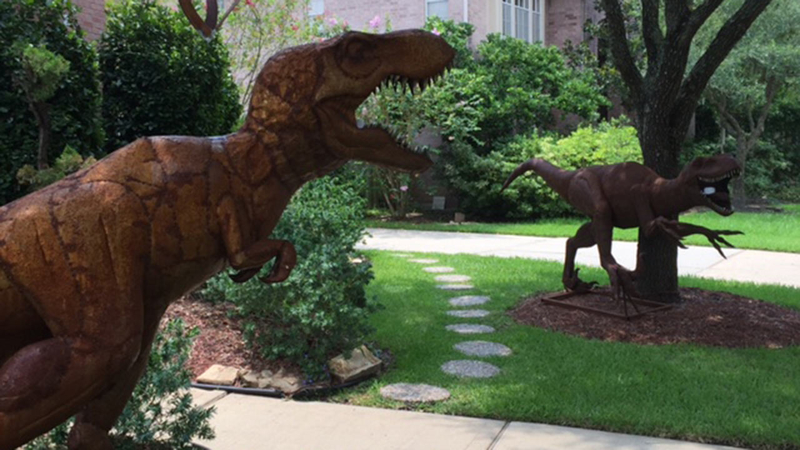 HOUSTON (KTRK) -- New Territory in Fort Bend County is a nice neighborhood, with well-maintained homes that are regulated in appearance by the subdivision's homeowners' association. Everything from exterior paint color to grass height is overseen by the HOA.

So, when two dinosaurs appeared in a front yard two days ago, it caught a lot of attention.

Nancy Hentschel and her husband have lived in their home for 17 years. On a recent trip to Arizona, she saw the metal sculptures created by an artist, and couldn't resist. The T-Rex and velociraptor made the trip New Territory where they stand poised beside two trees.

"Obviously it does make a little bit of a statement," Henstschel says, "and I've met more neighbors in the past 24 hours than I have in the 17 years we've lived here."

Kids stop to take selfies with the dinos, people come by to look. "It's creative and it's creating a real sense of community here," she says.

The neighborhood Facebook page has a lot of comments about the beasts -- a lot of them positive, and some suggesting that the sculptures are better suited to a backyard feature.

The HOA is aware of the dinosaurs. Its director was not available for comment as of this writing, but Hentschel says she's been contacted and asked what her plans were. "My plans are directly tied to their plans ." She says she is prepared to contest any request that they be removed.

It's about creativity, not conformity, Hentschel states. "About creating a sense of community, and letting yourself roar."

She also promises a few special effects for Halloween.