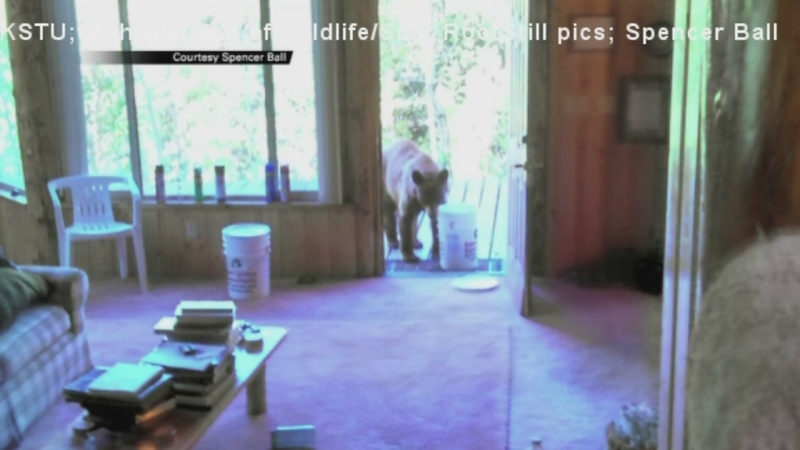 Bear comes in home for breakfast

BIG COTTONWOOD CANYON, UT -- A cabin owner in Big Cottonwood Canyon had an uneasy moment Monday morning when a bear walked in the front door while he was eating breakfast.

Spencer Ball has lived in a cabin near Brighton Ski Resort since 1991 but said this was a first.

A female black bear around 2 to 3 years old was roaming his deck for food around 8:30am.

"It went up to that hummingbird feeder," Ball said. "It just licked it for about 10 minutes."

But then the bear smelled a bucket full of peanuts inside the front door.

"The bear went and took this handle and put it down and I saw it moving inside and that bear came right in the house and stood right here and looked around," Ball said. "I started to go up these stairs and I was looking at the bear - and (it) was aware I was here."

Ball called 911, then grabbed a pistol and barricaded himself upstairs for a couple hours until authorities arrived. He felt held hostage in his cabin.

"If a bear was in my house, it could do anything," he said. "I was afraid that it could attack me."

The bear never attacked or ransacked Ball's home. It just kept eating those peanuts. Eventually, biologists from the Division of Wildlife Resources arrived and tranquilized the bear.

"I guess when he was hit with the dart, he took off running and went down right over that ledge there," Ball said.

Wildlife officials were able to trap the animal and later released it into the wild.