Man sets Humble home on fire after knocking on door, asks for help 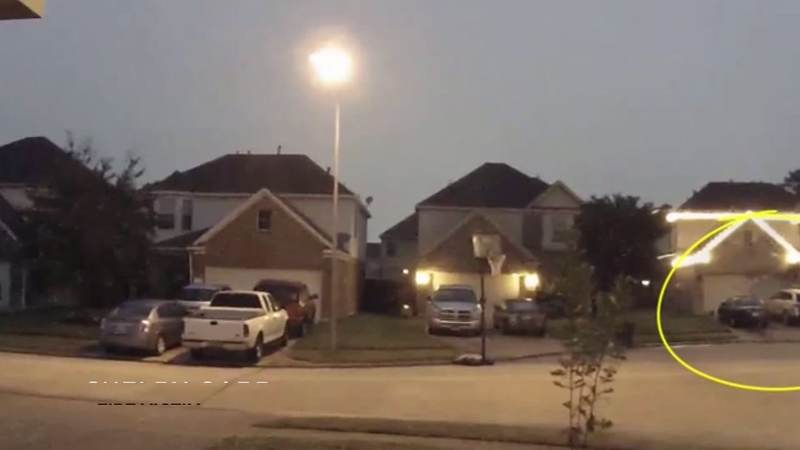 Man sets home on fire after knocking on door, asks for help

HUMBLE, TX (KTRK) -- A family says a man came to them trying to get help but later returned and set their Humble house on fire.

"I'm pretty angry," Chelby Carr says simply as she looks at the Atascocita home she grew up in, now charred and falling apart. "I'm not going to lie."

Carr is mad because Sunday morning, her home went up in flames. Authorities believe it was intentionally set.

A man seen on a neighbor's surveillance video walking away from the Carr family home at 6:30am Sunday. Just a few minutes later, the video shows the entire home erupting in flames. Carr's father Corey remembers trying to get his family out.

"My daughter, my wife, my brother was here, my 9-month-old granddaughter was spending the night," recalled Corey Carr. "Everybody got out."

But the fast-moving fire claimed the family's beloved chocolate lab Gracie, and a cat that did escape the initial fire had to be euthanized a day later. The family believes the man seen on video walking away at 6:30am is the same stranger who knocked on the door at 4am. He initially asked the family to call a phone number, and then he asked for a ride.

The family then went back to sleep. But just two and half hours later, their lives changed forever.

The Carrs say the suspect knocked on several other neighbors' doors as well, but theirs was the only house allegedly set on fire.

The Harris County Fire Marshal's Office confirmed it is investigating the case. Crime Stoppers is also involved and is offering a $5,000 reward.

The man is described as a young white male, 18-25 years old, wearing an oversized camouflage jacket.

"I hope they find him and he gets what he deserves," says Chelby Carr. "We sure as hell didn't deserve this. We didn't do anything to anyone to deserve this."

The Carrs are living with different family members for now.