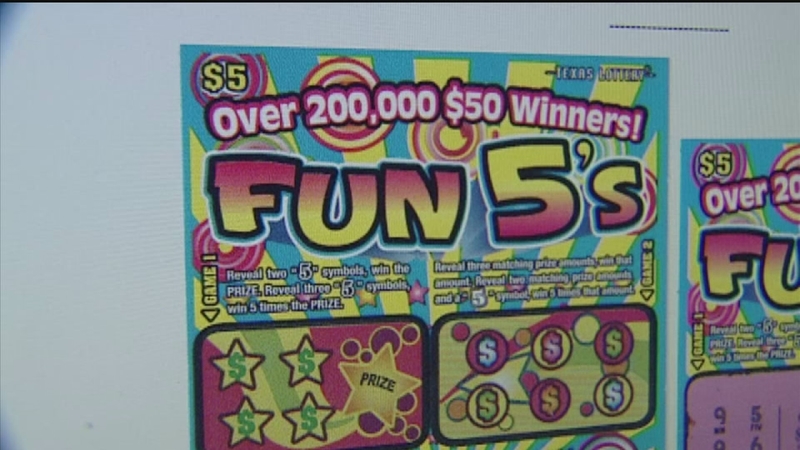 HOUSTON (KTRK) -- Some Texas lottery players thought they'd won big in a new scratch-off game launched earlier this month, but when they went to the counter to cash in they left angry.

The controversy revolves around the Fun 5's sold by the Texas Lottery Commission. While possible legal action against the state agency may be limited, those who have been angered say they may go after the manufacturer or even retailers of the ticket.

There are five ways to win on the ticket. Dawn Nettles with the watchdog group www.lottoreport.com says she started receiving phone calls the day after the September 1 sales began. She says there is a pattern established in the first four games. It's the fifth game where players have called her feeling deceived saying she's received, "hundreds upon hundreds upon hundreds (of phone calls.) It's unbelievable."

To some players it appears there are two ways to win -- by getting three 5's in a row or scratching off a money bag. But in reality the money bag winnings are contingent upon three 5's in a row. Nettles describes the issue in detail on her website with pictures. She says when players see that money bag and a cash prize beside it, "They're doing like lotto winners do they scream up and down and they go and show everyone and yes that's a winner. Then they go and scan the ticket and go to a claim center and scan it and are told they are not a winner and they are distraught."

"That verbiage is very misleading," says Manfred Sternberg, a local attorney who sent a demand letter to the Texas Lottery Commission on behalf of hundreds of players. He says of the tickets, "Everybody says lawyers are "and" and "or", this is one of those cases where "and" really means something. They didn't put the word "and" in so it looks like there's two ways to win in the game number five."

Below is the Texas Lottery Commission's response regarding Game 5 on the Fun 5's scratch-off game ticket:

"The first sentence of the play instructions for Game 5 of the scratch-off game, Fun 5's, explains how to win the prize in the PRIZE box. The sentence reads, Reveal three "5" symbols in any one row, column or diagonal, win PRIZE in PRIZE box. The second sentence, Reveal a Money Bag symbol in the 5X BOX, win 5 times that PRIZE, explains how to multiply a prize won as described in the first sentence.

We often have various multiplier features and prize amounts on the face of a ticket, not only to add variety to the game, but also as a security measure. This is done so that no one can determine whether or not a ticket is a winner without scratching the entire ticket.

We want to ensure that all players have a fun and enjoyable experience when participating in lottery games. We encourage players with questions regarding our games to contact our Customer Service Department at 1-800-375-6886 or email us at customer.service@lottery.state.tx.us for assistance with their questions."