Family hopes purple side mirror could lead deputies to the driver in a N Harris Co. deadly hit-and-run 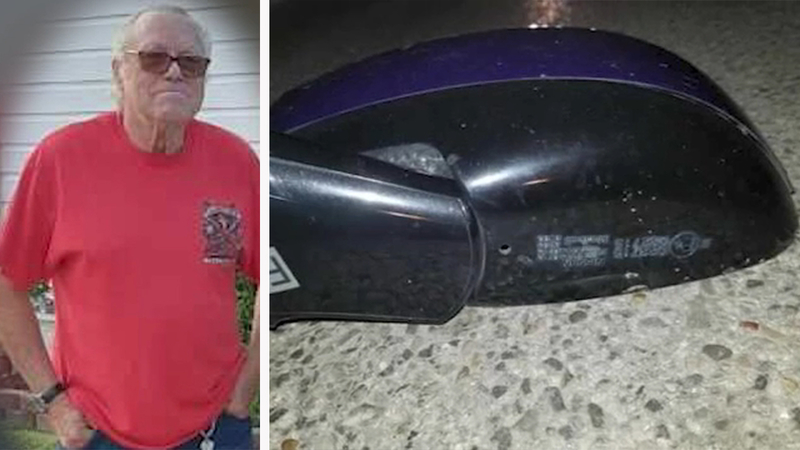 Could a mirror lead deputies to driver in fatal hit-and-run?

HARRIS COUNTY, Texas (KTRK) -- The family of a man killed in a hit-and-run in north Harris County is offering a substantial reward for information leading to an arrest and sharing a picture of potentially key evidence.

James Kessler, 75, died at the scene in front of his house on Gulf Bank near the Hardy Toll Road Friday night.

According to the Harris County Sheriff's Office, he was helping direct traffic around a truck and trailer that was backing into his driveway when he was hit and killed. The driver of the car, believed to be either a purple Nissan or Infiniti, stopped for a moment and then took off, according to Kessler's nephew and eyewitness, Eric Black.

"It's awful. Definitely when you see it close up and it's someone you love. It's even more awful that the person who did it didn't stop and just kept going," Black said. "How would they feel if it was their father or their uncle or grandfather who got hit and somebody kept going?"

The search is on for the driver who was driving a purple Nissan. That Nissan has damage, including a missing left-side mirror, deputies said.

A purple side mirror was left behind after the crash.

The sheriff's office is asking anyone with information to call Crime Stoppers at 713-222-TIPS.

Kessler's family has also raised $8,000 for a reward for information leading to an arrest.

Somewhere, a purple sedan is missing a side mirror and the driver is carrying on as Kessler's family grieves.

"It's super important. They're responsible for what they did and the pain that they've caused," said Robert Mitchell, another one of Kessler's nephews. "It's really important for my aunt and all of us to get some closure. Why didn't they stop? I don't know. Were they drinking? I don't know, but they left him in the street. It's not right."