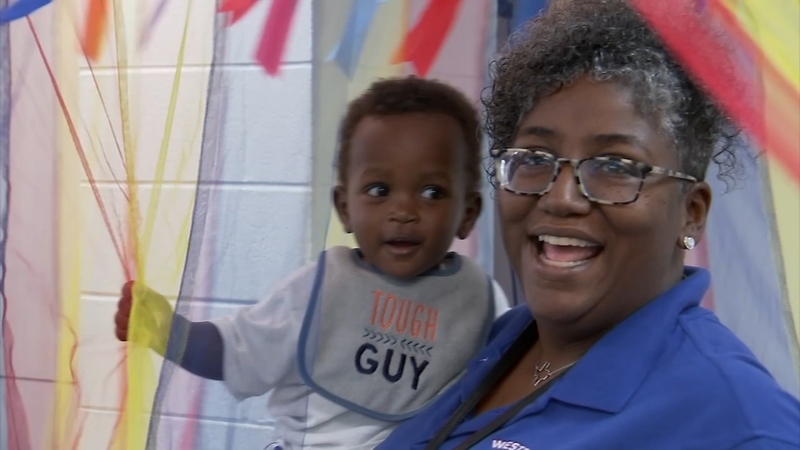 HOUSTON, Texas (KTRK) -- Jerry Brown is the parent engagement representative at Westbury High School, but she recently took on a new title-babysitter.

"We get in my homemade stroller, which is a wagon that we have here, and I'll take him around and will walk around and then we have lunch, and then I'll play with him," Brown said.

Her office is now a playroom, outfitted with toys and a playpen.

Little Derek's mom, Muhawe, a student at Westbury High, had him last year, but when school started this year, she didn't come back.

"I got this baby and I didn't have anyone to take care of him and stay at home with him so I can come back to school," Muhawe said.

That is until a knock at the door. Principal Susan Monaghan and her staff found Muhawe during their march for dropouts.

"Westbury had about six groups of people who were out searching for students that didn't come back," she said.

"So we went to this house and we found this lovely baby Derek, who has been at home with his mom for a year. She had him last August. The baby was born last August, and she decided that year that she couldn't leave him, he was too young, too little, and she didn't want to come back. She talked to us last year about maybe coming back mid-year, but it didn't happen," Monaghan said.

Muhawe got re-enrolled the day she found out about HISD's wraparound program.

"She very much wanted to be here. Right away, she said, 'Yes, I will come right now,'" Monaghan said.

This is why HISD created the wraparound services in 2017, geared to address critical issues and challenges such as health needs, food, homelessness, anything that affects the student's academic success.

In this day in age, you'd be surprised what some of these students are facing.

There are now about 145 wraparound specialists in HISD schools.

"This is the best example I've seen yet of the school going into the community and providing the resources, and having the students coming back to school, giving them a better shot of a future that they deserve," Monaghan said.

So while Westbury's wraparound specialists were busy working their resources, trying to find the best childcare option for Muhawe and Derek, Muhawe came to school, dropping Derek off with Ms. Brown and then heading to class.

It wasn't easy at first. But after a day, Derek became a school staple, with everyone pitching in to help.

"Now everything is set up and Monday, the baby will start daycare and we set it up close, to where she lives and in conjunction with her coming to school," Monaghan said.

"We deal with problems every single day and I don't want her to think that she can't graduate from school, because I have this baby now and I can't do it," Brown said. "You will do it and we're going to help you as much as we can, so far as we need to buy Pampers or milk, we're going to get it for your baby so you can attend school."

Ms. Brown says she's been in Muhawe's shoes and that's why she goes by an all means necessary mentality when it comes to helping students like her succeed.

"I was a single mom and I know that it is very, very hard, and I just want to help her. This is something she will never forget," Brown said.

As far as Muhawe, she's on track to graduate from Westbury this December and plans to start college in the fall.