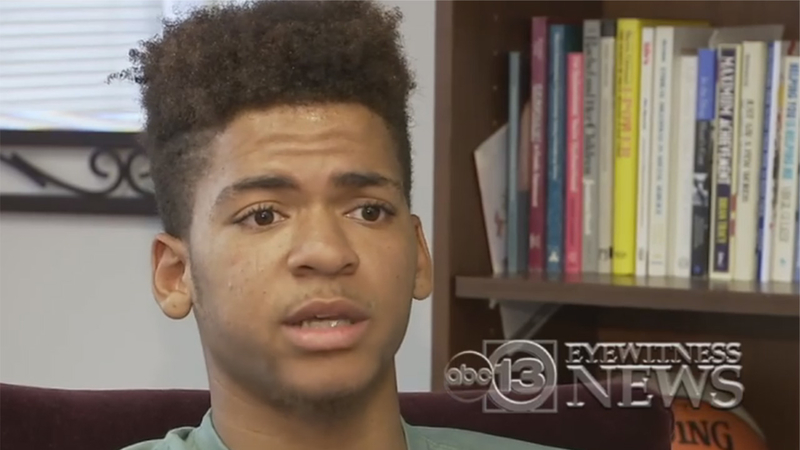 HOUSTON (KTRK) -- Just imagine yourself in these shoes. You're a homeless teenager. You spent your nights sleeping on Houston streets. Your family abandoned you.

You're keeping this all a secret. Yet you still get up and go to school every day.


That's the story of 20-year old Liyjon DeSilva. His mother passed away when he was only five years old. He bounced around with other family members before finding himself all alone.

For three years, DeSilva said he managed on his own.

"I wanted clothes. I wanted to be able to live like a normal kid, you know. I wanted to eat like a normal kid. I slept at parks. I love sleeping on parking lots because I could see the stars, the sky. There was one where I could see the horizon of the city. I slept at pools. Those were cool," said DeSilva. "I don't like to refer to it as bad or that it was terrible because I learned a lot. I learned a lot of survival skills. Life became a bit easier."

Principal Jonathan N. Trinh said in his 23-year career, DeSilva stands out as naturally gifted and among the Top 5 percent of students.

"The next thing I know we have one of our counselors who calls and says there's a report. We found him sleeping in the park," said Principal Trinh.

Trinh reached out with a helping hand. Jessica Smith, who was working for "Communities in Schools," also stepped in to offer assistance. She even helped find him a space to call his own.

"He calls me his mother figure. Liyjon has some very special inner resources that make him really driven and strong," said Smith. "There are tons of people out there who want to help and kids out there who need it."

On May 27, DeSilva graduated among the top of his class with a 3.67 GPA. He won a full scholarship to Carleton College in Northfield, Minnesota. While most of his costs are covered, his friends are raising money to help him with the basics, including buying a computer. If you want to help, visit their crowdfunding site.
Related topics:
educationhoustonhomelesshisdgraduationgood news
Copyright © 2021 KTRK-TV. All Rights Reserved.
TOP STORIES
'She left me to die' Motorcyclist wants to find hit-and-run driver
Father and 2 children critically injured in crash on Hardy Toll Road
Man shot as driver followed common-law wife, then crashed, HPD says
Unseasonably warm weekend, next front arrives Monday
Money in Lakewood Church wall may be tied to 2014 theft, HPD says
Parents of alleged MI school shooter arrested, authorities say
How unusual to charge parents in school shooting? EXPLAINED
Show More
Man drives to gas station after being shot in head on northwest side
Homeowners burn down house in attempt to get rid of snakes
Contact tracing revs up as omicron cases detected in several US states
UH could turn national title picture upside-down if it beats Cincy
Battleship Texas will open to the public 1 last time this weekend
More TOP STORIES News