HISD board refuses to speak about FBI raid and employees involved 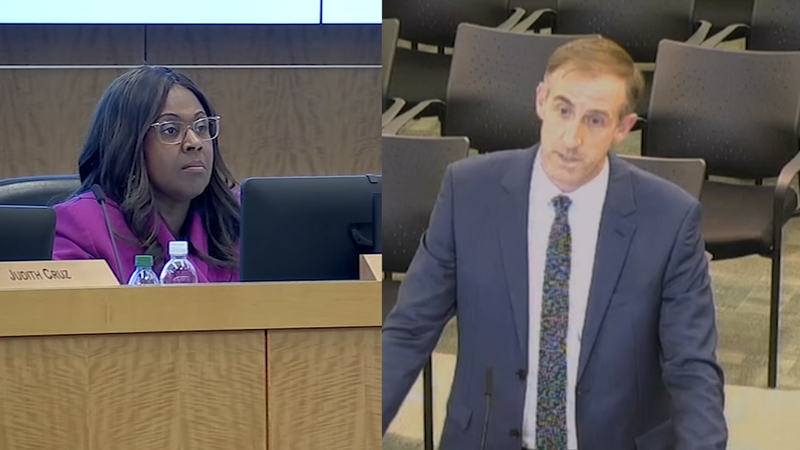 Ted Oberg at HISD meeting for answers on FBI raid

HOUSTON, Texas (KTRK) -- Minutes before an HISD Board of Trustees meeting Thursday night, the school district finally decided to announce HISD's Chief Operating Officer had been put on home duty.

Here's what we know about the FBI investigation going on at Houston ISD's administration building.

Despite repeated inquiries to Busby's status, HISD didn't release the information until 4:42 p.m. The board meeting started at 5 p.m.

Earlier in the day, 13 Investigates reporter Ted Oberg signed up to address the board as a citizen about the FBI actions.

In the last week, HISD's Press Office and Sue Deigaard, the board president, turned down or ignored repeated requests for interviews. Oberg asked the board, not about the FBI, but about the board's job to safeguard taxpayer money.

"My assumption is the (FBI) didn't tell you (what they were investigating) and they haven't told us," Oberg told the board. "But, I am asking you what you've done to safeguard the investment that this community has made in the district and what you, as a superintendent, are doing as a board of trustees to make sure that the business practices of this district are sound and safe?"

In return, trustees and interim Superintendent Grenita Lathan said nothing. There were no answers from the Superintendent who sent her top two administrators home with pay.

There were no answers from trustees elected to lead a district that, just a week ago, was visited by the FBI.

Given a second chance to speak or allow their silence to be reported, they all remained silent.

One more citizen addressed the board later on in the meeting, expressing concern about a contract the board is set to vote on in the near future. Busby had a hand in finalizing that deal. Neither the board, nor Superintendent Lathan addressed those concerns either.