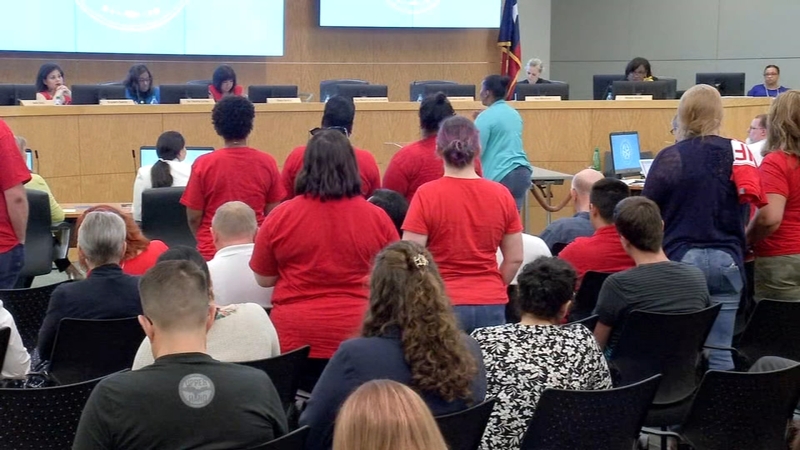 HOUSTON, Texas (KTRK) -- After a long night, the Houston Independent School District's board of trustees officially passed its budget for the 2019-2020 school year.

Teachers, staff and community members met Thursday in an effort to increase the base minimum pay for HISD workers to $15 an hour.

In a 5-1 vote, the board approved its budget, along with a $2 an hour increase for minimum wage workers, bringing their pay to $14 an hour.
Some say it was unfair to give raises to those already making more, while other employees say they are still trying to make ends meet.

HISD still without budget as other districts raise teacher pay.

The proposed budget the committee was considering included pay raises between 3.5 and 8 percent for employees, including teachers, counselors, nurses and librarians, depending on years of service.

The budget also asks for a retention bonus, but no raises for staffers making above $75,000. Interim Superintendent Grenita Lathan has said this would lead to layoffs, but teachers said no.

"It wasn't created to give money to administration. We've got teachers that get food assistance because they have large families, so they can't support their family," said teacher Rebekah Plourde.

Bus drivers would earn a minimum of $18 an hour under the proposed budget.

Other districts have already passed budgets to increase teacher pay.

Katy ISD already passed its budget giving teachers a 6 percent across the board pay raise and some have the chance to earn pay raises of up to 8 percent.

New teachers in Spring Branch ISD will earn $57,000 a year. Its new budget also includes raises of 6 percent to 9 percent for teachers.

Sheldon ISD is including a 10 percent to 15 percent raise for teachers. Beginning salaries for new teachers will increase to $58,500.