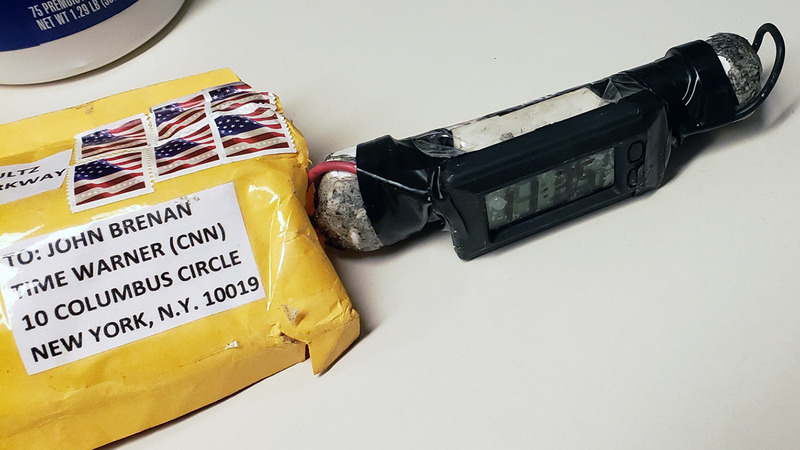 CHAPPAQUA, Westchester County -- FBI agents are responding to a U.S. postal facility in California, where a suspicious package addressed to Democratic Rep. Maxine Waters has been found by inspectors.

Their investigation comes after several potentially workable explosive devices were found in New York, Washington, D.C., and in Florida, all addressed to Democratic officials or well-known liberal activists.

Suspicious packages were found at the homes of the Clintons and the Obamas, as well as CNN headquarters in New York City Wednesday morning.

It was discovered sometime after 1 a.m. by someone who checks the Clintons' mail and was addressed to Former First Lady Hillary Clinton, who is currently in Coral Gables, Florida, for a closed-door fundraiser.
EMBED More News Videos

She discussed the incidents, saying she is OK and thanking the Secret Service for their work.

"Many of you and many others across our country have asked after me and my family, and I'm very grateful for that," she said. "We are fine, thanks to the men and women of the Secret Service who intercepted the package addressed to us long before it made its way to our home. Every day, we are grateful for their service and commitment."
EMBED More News Videos

Hillary Clinton addresses the news of suspicious packages sent to her home, the Obamas and CNN.

Former President Clinton was at home at the time the package was found, according to a source familiar with the situation who stressed that the package was screened and discovered away from the residence and was never close to Clinton.

Later Wednesday morning, a suspicious package was also discovered at former President Barack Obama's home in Washington, DC. That one was addressed to the former president.

The Secret Service released a statement saying that their protectees did not receive the packages, nor were they at risk of receiving them.

Then, at 9:38 a.m., a CNN mail room employee called 911 from the Time Warner Center in Columbus Circle to report a suspicious package. The NYPD bomb squad responded and evacuated the floors above and below the mail room.

The object appears to be a small pipe bomb with wires extending from it, and it was reportedly mailed to a person who works at CNN. It was removed from the building at 11:37 a.m.

Authorities say the devices are all consistent with the one found earlier this week in the mailbox of philanthropist and billionaire George Soros, who also lives in Westchester County.

The packages were immediately identified during routine mail screening procedures as potential explosive devices and were appropriately handled as such. The protectees did not receive the packages nor were they at risk of receiving them.

The Secret Service has initiated a full scope criminal investigation that will leverage all available federal, state and local resources to determine the source of the packages and identify those responsible.

President Trump has been briefed on the incidents and is condemning the "attempted violent attacks."

"We condemn the attempted violent attacks recently made against President Obama, President Clinton, Secretary Clinton, and other public figures," Sarah Sanders says in a statement. "These terrorizing acts are despicable, and anyone responsible will be held accountable to the fullest extent of the law. The United States Secret Service and other law enforcement agencies are investigating and will take all appropriate actions to protect anyone threatened by these cowards."