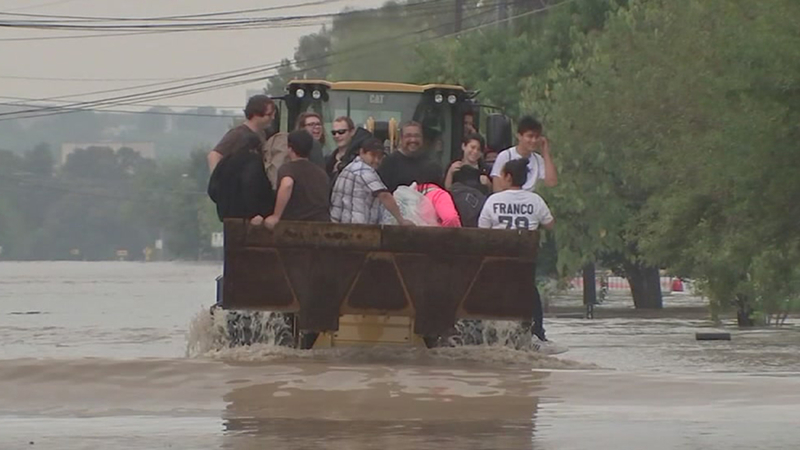 One dead in central Texas flooding

AUSTIN, TX -- Another round of storms and strong winds was moving east across Texas on Saturday, and two people were missing from earlier flash floods in the Austin area.

In the Houston area, an official said a tornado has been reported in southern Harris County, and officials were checking on any possible damage there.

Francisco Sanchez of the Harris County Office of Emergency Management said 4-7 inches of rain has fallen since Friday night and more was expected. He said many locations had high water and more than two dozen water rescues had taken place.

About 32,000 customers were without power, CenterPoint Energy said.

Two people already were known to have died - in Austin and near San Antonio - when they were swept away by flood waters. A man and a woman also were still unaccounted for in separate incidents.

The storms and suspected tornadoes have socked an already-sodden swath of Texas that was still drying out from the remnants of Hurricane Patricia, forcing evacuations of flood-prone areas and slowing or shutting down traffic on long stretches of Interstate 35.

Teams from the National Weather Service were to examine three areas Saturday where tornadoes were thought to have wreaked havoc on Friday.

More than 16 inches of rain soaked one neighborhood and Austin Bergstrom International Airport suspended all flights after a half-foot of water flooded the air traffic control tower. A lazy creek cutting through Texas wine country swelled into a rushing torrent, sending eight members of a vacationing church group scrambling to a second floor before they were rescued by the National Guard.

Powerful winds tossed a trailer from an RV park onto the roof of a three-story Holiday Inn. Abandoned cars, many submerged in water, littered back roads that weary drivers risked after heavy downpours flooded Interstate 35 between San Antonio and Austin, closing one of the busiest stretch of roadways in the U.S.

Last weekend, storms from Patricia's Category 5 aftermath dumped nearly a foot of rain in parts of the same region. Although not deadly, that drenching left the ground saturated and unable to sop up the latest deluge.

Forecasters say an upper-level disturbance from Mexico carried the storms into Texas as a strong El Nino is expected to make for a wet winter in the U.S.

Most eyes were on Wimberley, a popular getaway spot in the Texas Hill Country where the church group found themselves stranded. Similar conditions in May - soaking storms on the heels of others - caused devastating flooding on the Blanco River that swept homes from foundations and killed families who were carried downstream.

The Blanco River this time swelled to about 26 feet in Wimberley, nearly twice the flood stage. Residents were evacuated from the area and a community center was opened as a shelter.

Farther south in Floresville, a suspected tornado caused only minor injuries, said Sgt. Jason Reyes of the Texas Department of Public Safety. Ruth Veliz, whose parents own a taco shop in town, said one of her employees yelled "Tornado!" and tried to keep the winds from blowing inside before a customer pulled her to safety.

"The door was flying open with her as she was trying to close it," Veliz said.

Wind gusts of up to 70 mph were reported in some places. The flooded portion of Interstate 35 was reopened later Friday, but not before southbound drivers turned against traffic and tried driving north along the shoulder. Winds peeled off roofs elsewhere and collapsed a historic 19th-century building in the small town of D'Hanis, one of three cities where suspected tornadoes touched down.

"If it would have happened at 10 a.m. instead of 4 a.m., might have been a different story," Medina County Sheriff Randy Brown said.


Related topics:
austinfloodingweatherflash flooding
Copyright © 2021 by The Associated Press. All Rights Reserved.
TOP STORIES
Sisters walking to their car say they were hit by driver Saturday
No charges for 4 former officers who shot at unarmed man 21 times
Judge gives insight on the confines most face when setting bonds
Man accused in road rage shooting after Astros game appears in court
How do Houston's homicide numbers stack up with big US cities
1 killed after car crashes into tree in SW Houston, HPD says
Two wet weather systems rain on Texas this week
Show More
Here's how officials determine which migrants will stay in the US
Houston says final goodbye to HPD officer killed while serving warrant
Former Houston police chief Acevedo now at risk of losing Miami job
R. Kelly found guilty on all counts in sex trafficking trial in NYC
Teen intended to 'smoke' cyclists, but plowed into them instead
More TOP STORIES News