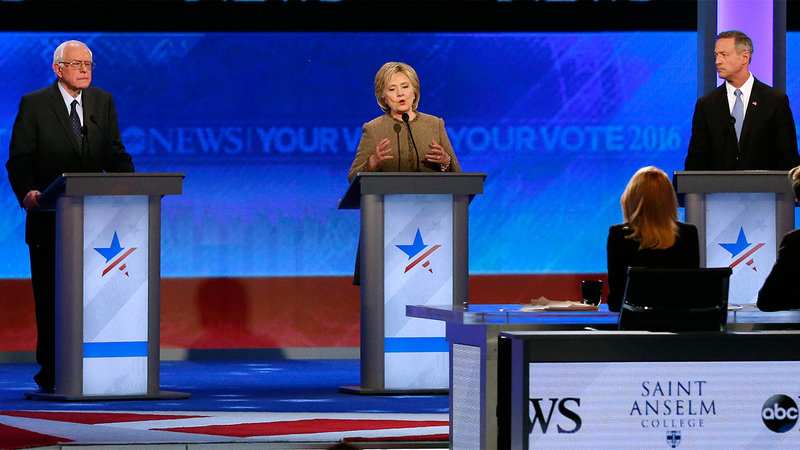 MANCHESTER, NH -- Bernie Sanders apologized to Hillary Clinton and his own supporters Saturday night for a breach of her campaign's valuable voter data, seeking to put the controversy to rest in a debate that quickly moved on to national security concerns and Americans' heightened fear of terrorism.

Clinton, the Democratic front-runner who kept an eye on the general election, was also sharply critical of Donald Trump's plan to ban Muslims from entering the United States, calling the leader of the GOP race the Islamic State's "best recruiter."

"Mr. Trump has a great capacity to use bluster and bigotry to inflame people," said Clinton, the former secretary of state.

PHOTOS: To view on a mobile device, CLICK HERE.


Clinton and Sanders, her closest challenger, entered Saturday night's debate in the midst of one of their fiercest fights - about the campaign itself rather than a national or international issue. Clinton's campaign accused Sanders' team of stealing information used to target voters and anticipate what issues might motivate them. In response to the breach, the Democratic National Committee temporarily cut off Sanders' team's access to its own data, a move the Vermont senator said Saturday was an "egregious act."

"This is not the type of campaign that we run," he said. Sanders' campaign fired a worker involved in the breach but also used the controversy to raise money, sending an email to supporters that said the national party had placed "its thumb on the scales in support of Hillary Clinton's campaign."

Clinton quickly accepted the apology Saturday night, saying "We should move on because I don't think the American people are interested in this."

The debate, the third for Democrats, was expected to have low viewership given that it was scheduled on the last weekend before Christmas, when many Americans have turned their attention to the holidays. It came as Clinton had solidified her standing atop the field, shaking off a rocky start and the controversy about her use of private email at the State Department.

Clinton and Sanders were joined on stage by former Maryland Gov. Martin O'Malley, who has struggled to be a factor in the race. O'Malley was aggressive in seeking to play a role in the debate, repeatedly talking over moderators and accusing his rivals of having outdated views on foreign policy.

In a heated exchange on gun control, O'Malley accused both Clinton and Sanders of having a "flip-flopping, political approach" to the contentious issue.

Clinton also defied moderators' efforts to cut her off at times, leading Sanders to call out, "Now this is getting to be fun."

While there was broad agreement among the Democratic contenders that the U.S. should not launch a ground war to defeat the Islamic State, they differed in the tactics they would take and whether the nation should seek regime change in Syria, where IS has a stronghold.

Clinton recommended more direct action than her competitors, calling for a no-fly zone over part of Syria and insisting that the U.S. must seek to remove Syrian President Bashar Assad from power.

"If the United States does not lead, there is not another leader - there is a vacuum," she said.

Sanders disagreed, saying the U.S. should first seek to defeat the Islamic State, calling Assad a "secondary issue" that should be dealt with over the course of years.

"Yeah, regime change is easy, getting rid of dictators is easy, but you have to think about what happens the day after," he said.

All three candidates stressed working more closely with Muslim-American communities to tackle radicalism at home - a sharp difference from the rhetoric of some Republican candidates. Returning to her focus on Trump, Clinton said, "If you're going to put together a coalition in the region to take on the threat of ISIS, you don't want to alienate the very countries you need to be part of the coalition."

Sanders sought to stand out on foreign policy by noting that he voted against the 2003 invasion of Iraq, an unpopular war Clinton supported. He said he does not support any "unilateral military action" but rather a coalition in which the U.S. works hand in hand with Muslim nations to fight the radical militant group.

Saturday's debate was the first for Democrats since the shooting in San Bernardino, California, where 14 people were killed by a married couple that authorities say had been radicalized. The incident, as well as earlier attacks in Paris, pushed national security to the forefront of the 2016 White House race.

The foreign policy focus has blunted Sanders' momentum in the Democratic race. The senator has deeply loyal supporters who are drawn to his economic- and inequality-focused campaign, but he's far less comfortable discussing foreign policy issues.

Sanders sought to refocus on his core message of leveling the economic playing field for middle class Americans, including his call for free college tuition and a single-payer health care system. Clinton challenged Sanders on how he would pay for those proposals, suggesting he'd pass on the costs to states and middle class Americans.

She pledged that as president, she wouldn't raise taxes on families making $250,000 or less per year. "That is a pledge that I'm making," she said.

Sanders has accused Clinton of being too cozy with Wall Street and running a campaign funded by wealthy executives, charges she has rejected. Asked whether corporate America would love a Sanders presidency, he said simply, "No, I think they won't."