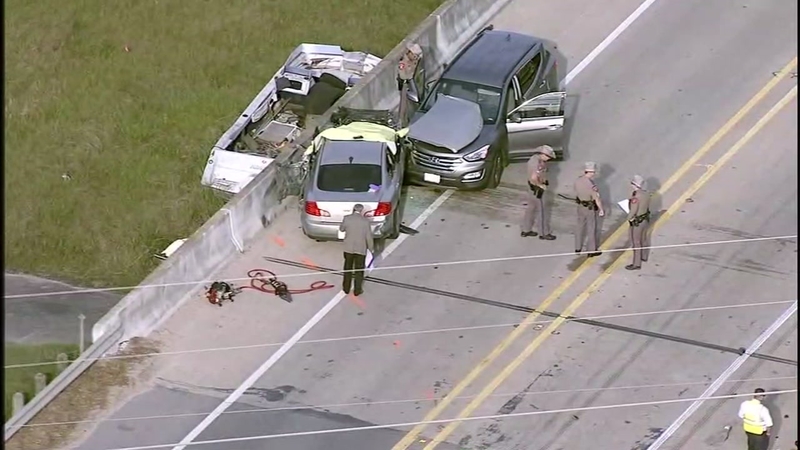 MONTGOMERY COUNTY, Texas (KTRK) -- A driver has been killed on Highway 242 in Montgomery County near the San Jacinto River where a trailer got unhooked and slammed into a vehicle Thursday afternoon.

Texas Department of Public Safety is investigating the crash that happened just before 2 p.m.

"It's sad. It's horrific," Texas Department of Public Safety Sgt. Erik Burse said. "There's pieces of vehicles everywhere. You had two pieces of roadway that had to be shutdown. It's a main funnel from I-45 to FM 1314. So it was a mess."

A vehicle traveling west on the state highway lost its trailer load. The load then veered into eastbound traffic and struck another vehicle.

"When I pulled up I saw the trailer flipped over and the car that had the blanket on top of it and then I had another car behind it," witness, Marcus Jones recalled. "It's terrible, man."

The roadway was closed for three hours and reopened around 5 p.m.

DPS said a third vehicle was involved in the wreck.

Someone from that vehicle was taken to a nearby hospital with injuries.

Troopers said the truck driver wasn't hurt and was cooperative.

DPS said the driver wasn't cited as it investigates the crash.