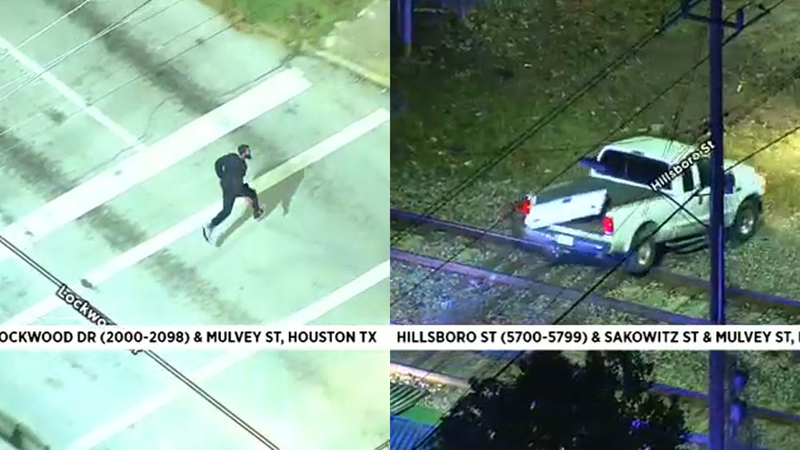 HOUSTON, Texas (KTRK) -- A man wanted in an ATM burglary is in custody after he led authorities on a chase during rush hour traffic Friday morning on the Eastex Freeway.

Harris County Sheriff Ed Gonzalez said this all started when deputies responded to an alarm for the burglary near FM 2100 and FM 1960 at about 6 a.m. in Huffman.

When deputies arrived, Gonzalez says the man took off, sending authorities on a chase that crossed into Humble, and finally, Houston.

SkyEye was over the chase as the suspect in the pickup truck weaved southbound on the freeway, driving on the shoulder at times, eventually exiting and ending up on Hillsboro Street.

From there, he drove across train tracks, knocking the truck's tailgate off.

He continued down the road on Mulvey Street, where he left the vehicle in a ditch and ran off into Boyce-Dorian Park on Erastus. He was arrested in the middle of the park.

Deputies say the man didn't get away with anything. It's not clear at this time if he was the only one involved.

Authorities were investigating a separate crash in the southbound lanes of the freeway at the time of the chase, but the suspect managed to avoid it.

"He endangered a lot of lives this morning, but it worked out," HCSO deputy John Hernandez said.

Hernandez said it would also be helpful if drivers stayed aware on the road and pulled over as authorities try to end things like this safely.

@HCSOTexas units were involved in a vehicle pursuit. It just concluded near Lockwood @ Kress. A male is in custody. Preliminary info: our Deputy responded to an alarm call near 2100 & 1960, possibly involving an ATM. Upon deputy’s arrival, the male fled the scene. #HouNews pic.twitter.com/pOqMrlmzZO

"He endangered a lot of lives this morning." Watch as a man weaved in and out of traffic to try to escape deputies.