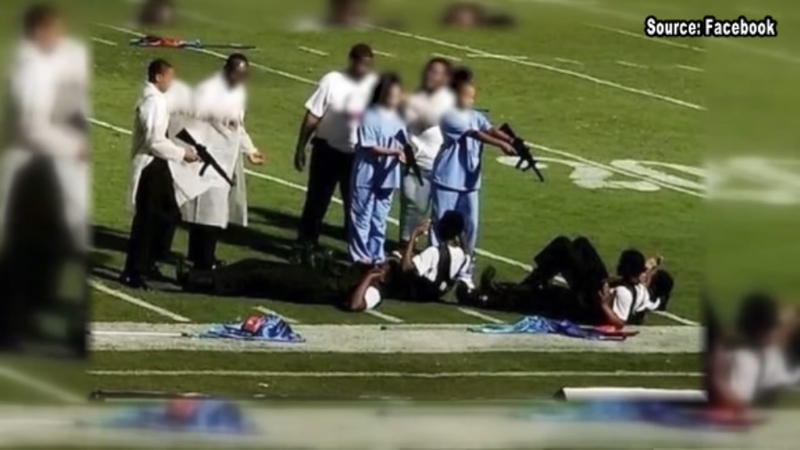 A controversial halftime show by a Mississippi high school marching band has caused its director to be placed on administrative leave.

Jackson Public Schools Superintendent Dr. Errick L. Greene apologized Saturday in a statement and acknowledged the skit was "insensitive." Greene said the performance was based loosely on the movie, "John Q," and depicted a hostage scene that included toy guns. In the movie, a father portrayed by Denzel Washington takes hospital staff and patients hostage as he tries to force doctors to do a life-saving transplant on his son, a procedure that his insurance won't cover.

"JPS has a great deal of respect and appreciation for our law enforcement partners," Greene said. "The band's performance does not depict the values and people in our community, and was incredibly insensitive to the students, families, law enforcement officials and the entire Brookhaven community. For this we sincerely apologize to all, and we pledge to do better in the future."

Brookhaven Mayor Joe Cox said he has spoken with Jackson Mayor Chokwe Lumumba, who informed him that the Forest Hill band director has been placed on administrative leave pending an investigation. He added that the mayor apologized to him personally for the halftime show.

"I offer my sincerest regrets to the Brookhaven community for the insensitivity that (was) portrayed during the Friday evening halftime show. There is an active investigation into the circumstances that led to this performance," Lumumba said in a statement Saturday. He added, "It is the responsibility of adults to offer guidance to youth. Our students should have been instructed that this was neither the time or place for that performance."

Brookhaven is about 55 miles (88.5 kilometers) south of Jackson, the state capital.

"This is unacceptable in a civilized society," he said.

The Mississippi Department of Education issued a statement late Saturday, saying: "This performance was in poor taste and insensitive, and we expect better of our teachers and school leaders who are responsible for guiding students appropriately," the Clarion Ledger of Jackson reported .

"How could any administrator think that halftime show was appropriate?" Doty wrote.

Many people, in comments on Facebook, said they were shocked and outraged by the performance.

"Why would ANY high school marching band ever need fake guns?" he asked in a post on Facebook. "Have they been performing this routine all year? ... If this pans out like it's looking this morning, however, I'll be disappointed, offended, and apologetic to both the people of Brookhaven and to those kids at Forest Hill who deserved better from the adults around them."
Report a correction or typo
Related topics:
educationmississippihigh schoolbandu.s. & world
Copyright © 2021 by The Associated Press. All Rights Reserved.
TOP STORIES
Astros tie World Series with 7-2 win over Atlanta in Game 2
Windstorm could bring gusts up to 50 mph Thursday
Brothers describe boy's beating death in their family home
'That's not a mother': Grandmother of accused mother's daughter reacts
3rd person accuses same man of road rage, says he spat in her face
Eyewitness describes deadly Buffalo Speedway shooting
Police investigating after person found shot at San Jacinto College
Show More
The Woodlands voters consider incorporation in Nov. election
US limits immigration arrests at schools, 'protected' areas
Tree damages home and SUV during storm in N. Harris County
Is it a chicken? Astros and Braves fans struggle to identify mascots
Facts about 'Bobby Dynamite,' the Astros train guy, you may not know
More TOP STORIES News