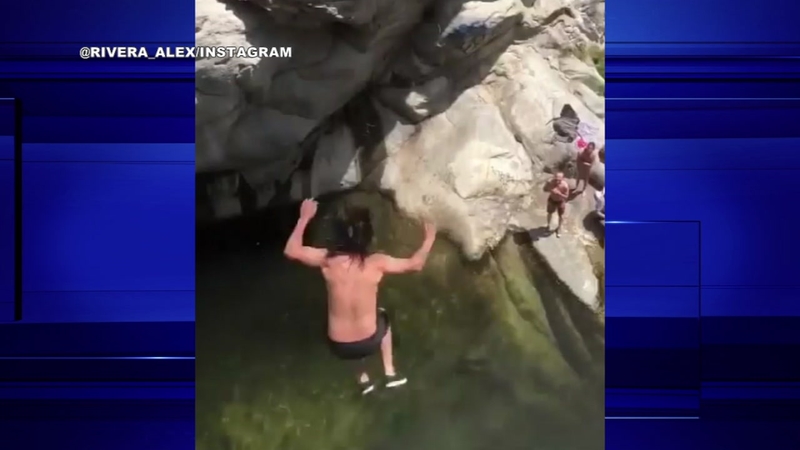 LOS ANGELES, California -- Officials are sounding the alarm about a costly and dangerous trend: people risking their lives and doing dangerous stunts - all for the perfect selfie.

Cliff jumpers are a common sight at Hermit Falls near Monrovia in southern California, and those jumps are now quickly posted on Twitter or Instagram.

But rain isn't so common in the region these days, and Los Angeles County Sheriff's Department rescuers say that the pool of water below may not be as deep as you think.

"Yeah, I saw on Instagram they were jumping off a rock formation into the pool of water. 'It's summertime, hey, that looks cool, it must be safe,' and then they go on up there and they do it and they realize, 'Wow, that water wasn't quite as deep as I thought,'" explained Deputy Stephen Doucette.

Another popular jumping spot is the Malibu Creek Rock Pool in Agoura Hills.

Flirting with danger may be a quick way to earn likes on social media, but the LASD says they're getting a lot more calls to save these weekend daredevils.

Search-and-rescue teams conducted 681 missions in 2017, the largest number in five years. Most of these calls are coming from remote locations, areas where an expensive rescue helicopter is needed.

"It's a huge response and if you were to quantify it in dollars, you're talking thousands and thousands," Doucette added. "And if somebody were actually handed a rescue bill, they might change their mind in the future."

The cost could be even greater if you don't have the right equipment or you attempt something dangerous.