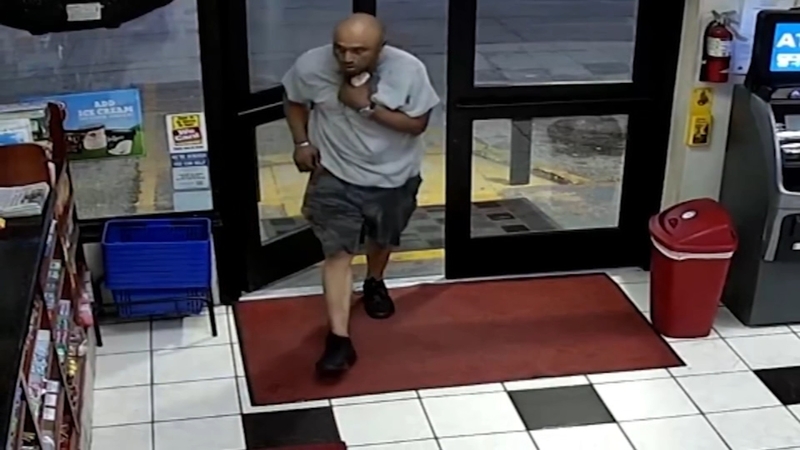 HOUSTON, Texas (KTRK) -- Holding a piece of the car bumper that was left behind after a suspect stole a customer's car, Tarfin Micu sits inside his auto shop, Fixers Automotive, in The Heights, recovering while the car thief remains on the run.

"It was Friday morning," recalled Tarfin.

The morning of Jan. 14, police said a man walked into the shop and began making casual conversation with Tarfin while he was working on a red Cadillac CTS.

"He said that he liked that car, I said, 'Yes I'm working on it,'" Tarfin recalled.

Then, as Tarfin backed away to check diagnostic readings, he said the suspect jumped into the driver's seat.

"He locked the door, and then I tried to get the key out from the car and that's when he punched me," Tarfin said.

He was knocked unconscious, but his body was still hanging inside the driver's window as the suspect backed up, dragging the 65-year-old mechanic along with the car.

The suspect then crashed the car into the neighboring business where the car's bumper came loose. Tarfin was able to push himself out of the car window, falling to the ground as the suspect sped off.

The auto shop owner was left brutally injured in the driveway of his own business. His foot was crushed, his pelvis cracked, a rib and vertebra both fractured.

The neighborhood he talks of is the one he has called home for nearly 30 years. A Romanian immigrant, Tarfin, opened Fixer's Automotive on 11th Street near Heights Boulevard in 1993 as the owner and sole employee.

He may be home from the hospital, but he is far from re-opening the business.

His auto shop has now been closed for the longest stretch of time in his professional career. But as the primary breadwinner for his wife and teen daughter, Tarfin said he is determined to get back to work.

"You know, the overwhelming response from our customers, from neighbors, people who don't know us ... it's made the whole thing feel better. The love and the support," said Crina Micu, the mechanic's wife.

Some of that support came in from as far away as Wisconsin, where a local automotive shop owner who read about the crime was inspired to send a check with a letter of encouragement.

Crina said the local support from her daughter's school, River Oaks Baptist School, to a neighbor, who was there to assist the immediate aftermath of the crime, has made all the difference.

"I want to thank the head of the school, Ms. Leanne Reynolds," said Crina. "And the young hero, Brian Laney. I would never be able to thank him for what he's done."

Police found the car a week later and told the family the stolen car was used in a string of robberies.

New surveillance video shows the suspect hanging out at a convenience store down the street from the robbery just before the crime occurred. The suspect is described as a bald man with a large tattoo on his right calf.

If you know anything about this suspect, a cash reward is available for information leading to an arrest. Call Crime Stoppers anonymously at 713-222-TIPS (8477).