More than 40 dead in Japan as heat wave grips country 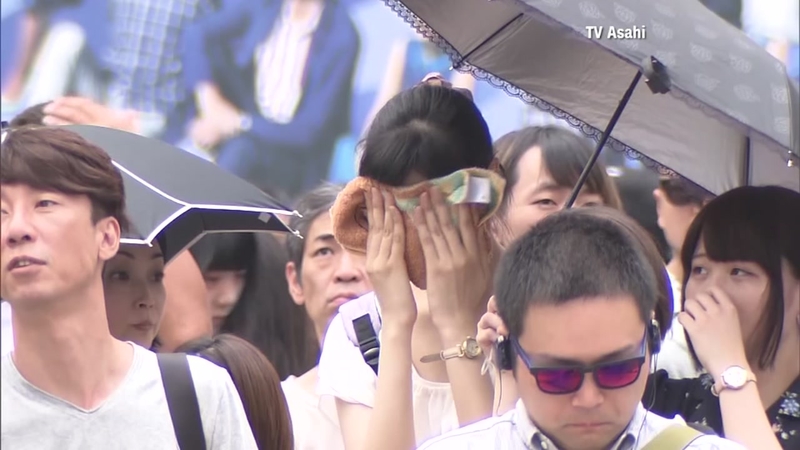 TOKYO, Japan -- Japan recorded its highest temperature ever Monday as a deadly heat wave continued to grip a wide swath of the country and nearby South and North Korea.

The mercury hit 41.1 degrees Celsius (106 degrees Fahrenheit) in Kumagaya, a city in Saitama prefecture about 65 kilometers (40 miles) northwest of Tokyo, the Japan Meteorological Agency said. That broke the previous record of 41.0 C in Ekawasaki on the island of Shikoku on Aug. 12, 2013.

Two lingering high pressure systems have trapped warm and humid air above the region, bringing record-high temperatures for nearly two weeks. More than 40 people have died in Japan and about 10 in South Korea.

"It is so hot these days that I cannot figure out whether I am in (South Korea) or in Southeast Asia," said Kim Sung-hee, a student in downtown Seoul, where the temperature rose to 35.7 C (96 F).

Ten people have died in South Korea of heatstroke and other heat-related causes this summer, seven of them last week, the Korea Centers for Disease Control and Prevention said Monday. About 1,040 people have fallen ill because of hot weather from May 20 to July 21, an increase of 61 percent over the same period last year, it said.
South Korea's highest-ever morning low was recorded in the city of Gangneung, where the temperature was 31 C (88 F) at 6:45 a.m. The morning low in Seoul was 29.2 C, a record for the country's capital, according to South Korea's weather agency.

The mercury hit 39.9 C (103.8 F) in the southeastern town of Hayang, the highest temperature in the country so far this year.

In North Korea, residents fanned themselves on crowded trolleys or protected themselves from the sun with brightly colored parasols as temperatures in Pyongyang, the capital, reached 34 C. Weather reports said even higher temperatures were recorded on the country's eastern coast.

Thousands of people in Japan have been rushed to hospitals with heat stroke symptoms during the heat wave. Kyodo News agency has tallied more than 40 deaths. Many of the victims have been elderly people who were not using air conditioning.

The temperature reached 39 C (102 F) on Monday in central Tokyo, the highest temperature this year. The worst of the heat wave is expected to be over this week.

Tourists in Tokyo's historic Asakusa district struggled with the heat. Cosett Romero from Mexico said she and her family were getting headaches.
"It's difficult to us because we don't have this heat in Mexico," she said.

Authorities warned people to stay inside and use air conditioning.

"The weather recently in Tokyo and across Japan is like being in a sauna," Tokyo Gov. Yuriko Koike said at a news conference that highlighted the 2020 Summer Olympics, which open in Tokyo two years from Tuesday.

She said that the city has been working to address heat concerns for both fans and athletes.

The marathon and some other outdoor Olympic events will start early in the morning. Other steps include developing road pavements that emit less surface heat, setting up mist sprays and planting tall roadside trees.

Koike also cited traditional ways of cooling in Japan, such as hanging straw screens and spraying water on road surfaces.