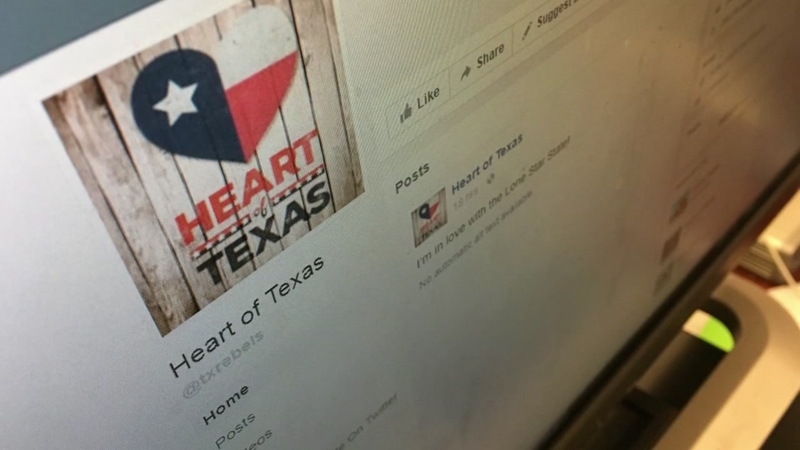 HOUSTON, Texas (KTRK) -- In May 2016, a Facebook Group called Heart of Texas organized an anti-Muslim rally in Houston. Now it seems that group wasn't from Texas at all and may have originated in Russia.

The Heart of Texas Facebook page is no longer available. Its 249,000 members have nothing new to like.

But 16 months ago, many of them were protesting the Islamic Dawah Center and library in downtown Houston.

Mustafaa Carroll with the Houston chapter of the Council on American Islamic Relations spoke to authorities about threats he saw in the Heart of Texas page.

"This stuff where we see the Russians instigating," he said. "You know, that's crazy. "

"You don't die from AIDS," said Carroll. " What you die from is the fact that your defenses are now down."

Reporter Casey Michel is a Rice graduate who writes for the politically progressive website ThinkProgress. He began reporting on possible Russian backed pages - including Heart of Texas - two years ago and is working on a series of reports now.

"It was clear from the get-go that whoever was running this page was not a native English speaker," he said in an interview via Skype. "It was impossible to tell what their native language may have been, but it did have certain grammatical constructs that were similar to Russian. "

Heart of Texas didn't just sow seeds of discontent with race or religion. It also backed Texas secession, playing off the ideas of the unaffiliated Texas Nationalist Movement with regard to Texas independence.

"Frankly, I think we bristle at anyone from outside of Texas insinuating themselves into what should be a purely Texas debate," said the group's president, Daniel Miller.

Russian interference is well documented and is an ongoing threat, according to Texas Congressman Michael McCaul, chair of the House Homeland Security Committee.

"There's no doubt in my mind Russia meddled in our elections," he said when asked about Russian trolling sites. "I think the question is what impact, if any, that they had. The Russian...foreign adversaries have been trying to influence our elections for many years."

We reached out to Facebook Friday morning for comment. As of the posting of this article, we've not received a response.