Also: "What's the difference between a normal reaction to the vaccine and a reaction that you should be concerned about?"
KGO
By Luz Pena 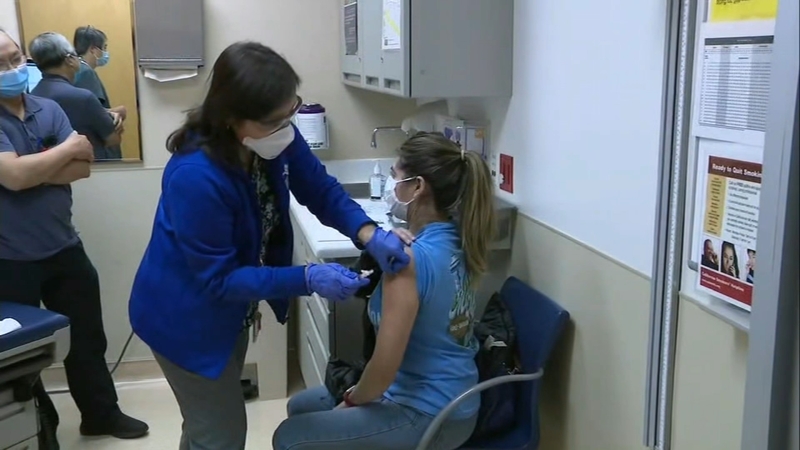 Why some are experiencing side effects after 2nd vaccine shot

SAN FRANCISCO -- As more people are eligible to get vaccinated, reports of side effects after the second Pfizer and Moderna shots are surfacing.

Luz Pena: "Having side effects is not a bad thing?"

Pleasanton Resident Will Anz received his second Pfizer shot on March 24 and experienced side effects several hours after the vaccination.

"I play recreational hockey and I play goalie and I felt like I played 4 games of hockey in a row. That's how much my body ached. From my neck and shoulders to my ankles," said Anz.

Luz Pena: "How are you feeling?"

Anastasia: "Feeling okay. A little bit better than yesterday," and added, "I just had a really rough night. I think I slept an hour maybe. I just tossed and turned because I just had full body aches and I'm still experiencing that today just taking Tylenol and getting chill here and there."

Dr. Wachter says body aches, a slight fever, and chills are a sign that your body is having an immune response.

So, I’m doing a story about it tonight.

▪️Did you have any side effects after your 2nd #Pfizer or #Moderna shot?

Luz Pena: "Why is it that women and younger people are having more side effects than the older folks?"

Another side effect is insomnia. "I've heard of it. If system is revved up, could happen," said Dr. Wachter.

Many pointed out feeling the side effects of the vaccine 10-12 hours after that second shot.

"It's basically a code that gets your body to begin producing the spike protein. Which then your body starts saying 'oh this is foreign, I've never seen this before I'm going to develop antibodies to it.' That just takes a little bit of time. That whole manufacturing process to work," said Dr. Wachter.

What's the difference between a normal reaction to the vaccine and a reaction that you should be concerned about? Dr. Wachter says it's all about the timing. A bad reaction or an allergic happens in the first 15-20 minutes of getting vaccinated.

Dr. Wachter recommends to go in hydrated into your vaccination appointment and not to take any anti-inflammatory medicine before your shot. Only afterwards if you need it.

Even after two to three days of uneasiness, many who've gotten the second Pfizer or Moderna shot agree on one thing.