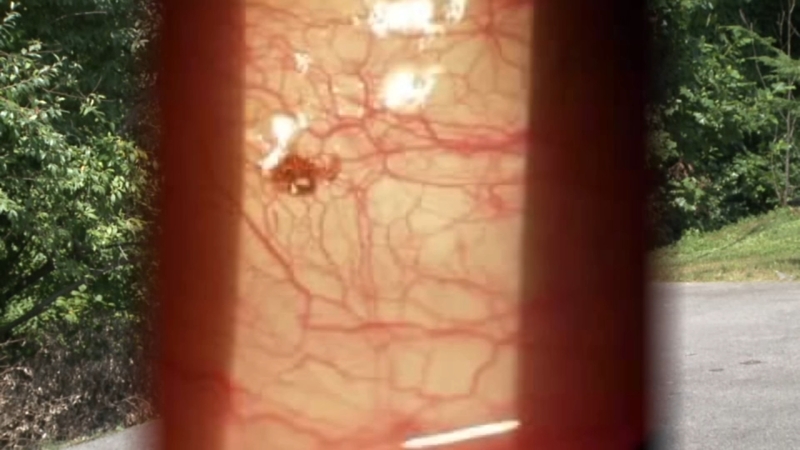 FLOYD COUNTY, Kentucky (KTRK) -- It's never fun to find a tick stuck to you, but one man is recovering after finding a tick on his eyeball.

Chris Prater works for an electric company and he starts each day with spraying himself with repellent.

"Ticks are so bad this year, so we always try to spray down really good," said Prater.

However, one tick made its home in an unusual place.

Prater noticed something was wrong after leaving a job site, where his crew cut a tree from some power lines.

"I noticed I just started having irritation in my eye," recalled Prater.

He asked the office safety manager to take a look at it, but after flushing his eye multiple times, the spot did not budge.

"The thing of it is, I really didn't want to go to the doctor. I figured if it was something it would come out on its own," Prater said.

As the irritation continued, he decided to see a local optometrist.

"He said, 'It's a tick.' That's when I got scared a little bit," said Prater. "I leaned around and looked at him and I asked him if he was joking and he said, 'No, you have a deer tick or some type of tick.' It was very little."

The doctor numbed Prater's eye and using tweezers, he pulled the tick out.

"Once he grabbed ahold of it and pulled it off, the tick made like a little popping sound when it came off of my eye," recalled Prater.

The doctor sent Prater home with antibiotics and steroid drops for his eye.

Now, Prater has a piece of advice for those who find themselves outside often.

"You get a lot of kids hiking, camping, I just urge them to spray, but you can't spray your eyes," Prater joked.

The safety manager posted photos of the tick in Prater's eye online.

According to WYMT, the post gained about 92,000 shares since Friday.

TASTY TEARS? Doctors treating a Taiwanese woman for a swollen eye were shocked to find four tiny sweat bees living under her left eyelid, feeding on her tears.

A coroner is urging people to use metal straws with caution after a woman was impaled through the eye by a straw that was sticking out of a glass jar she was carrying.