Former Presidents Obama, Bush and Clinton volunteer to get coronavirus vaccine publicly to prove it's safe 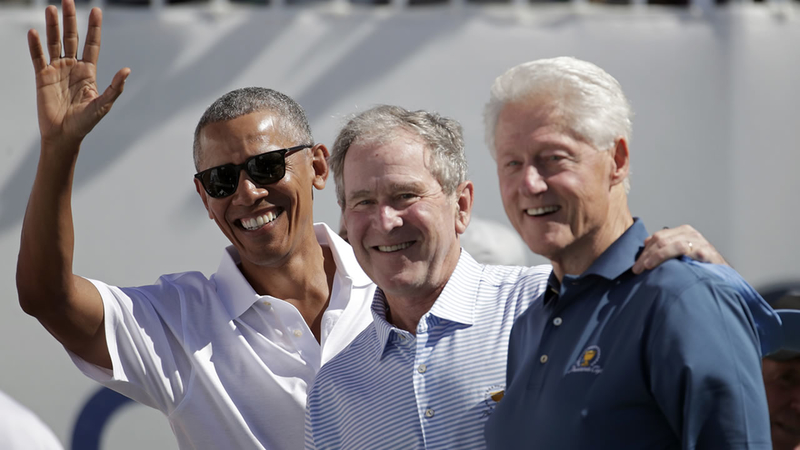 Former Presidents Barack Obama, George W. Bush and Bill Clinton are volunteering to get their Covid-19 vaccines on camera to promote public confidence in the vaccine's safety once the US Food and Drug Administration authorizes one.

The three most recent former presidents hope an awareness campaign to promote confidence in its safety and effectiveness would be a powerful message as American public health officials try to convince the public to take the vaccine.

Freddy Ford, Bush's chief of staff, told CNN that the 43rd President had reached out to Dr. Anthony Fauci -- the director of the National Institute of Allergy and Infectious Diseases and the nation's top infectious disease expert -- and Dr. Deborah Birx, the White House coronavirus response coordinator, to see how he could help promote the vaccine.

"A few weeks ago President Bush asked me to let Dr. Fauci and Dr. Birx know that, when the time is right, he wants to do what he can to help encourage his fellow citizens to get vaccinated," Ford told CNN. "First, the vaccines need to be deemed safe and administered to the priority populations. Then, President Bush will get in line for his, and will gladly do so on camera."

Clinton's press secretary told CNN on Wednesday that he too would be willing to take the vaccine in a public setting in order to promote it.

"President Clinton will definitely take a vaccine as soon as available to him, based on the priorities determined by public health officials. And he will do it in a public setting if it will help urge all Americans to do the same," Angel Urena said.

Obama, in an interview with SiriusXM host Joe Madison scheduled to air Thursday, said that if Fauci said a coronavirus vaccine is safe, he believes him.

"People like Anthony Fauci, who I know, and I've worked with, I trust completely," Obama said. "So, if Anthony Fauci tells me this vaccine is safe, and can vaccinate, you know, immunize you from getting Covid, absolutely, I'm going to take it."

"I promise you that when it's been made for people who are less at risk, I will be taking it," he said.

"I may end up taking it on TV or having it filmed, just so that people know that I trust this science, and what I don't trust is getting Covid," he added.

CNN has reached out to representatives for former President Jimmy Carter to see if he would be willing to take the vaccine publicly as well.

The Bush family has a history of banding together with other presidents to promote major causes. Bush's father and mother, the late former President George H.W. Bush and Barbara Bush, took a commercial flight in the days after the September 11, 2001, terrorist attacks to promote public confidence in flying again. George H.W. Bush and Clinton worked together on fundraising for areas struck by Hurricane Katrina in 2005 and for other charitable causes in the years after their presidencies.

Obama now also aims to use his post-presidency perch for a public awareness campaign.

During the interview, Obama appeared to acknowledge the very real problem of vaccine hesitancy, which some health experts worry could cause minorities -- who have been more adversely affected by the coronavirus pandemic -- to avoid getting a shot.

"I understand you know historically -- everything dating back all the way to the Tuskegee experiments and so forth -- why the African American community, would have some skepticism. But the fact of the matter is, is that vaccines are why we don't have polio anymore, the reason why we don't have a whole bunch of kids dying from measles and smallpox and diseases that used to decimate entire populations and communities," he said.

Previous studies have revealed that minority communities have higher death rates from Covid-19, are more exposed and the most vulnerable in part because of pre-existing conditions.