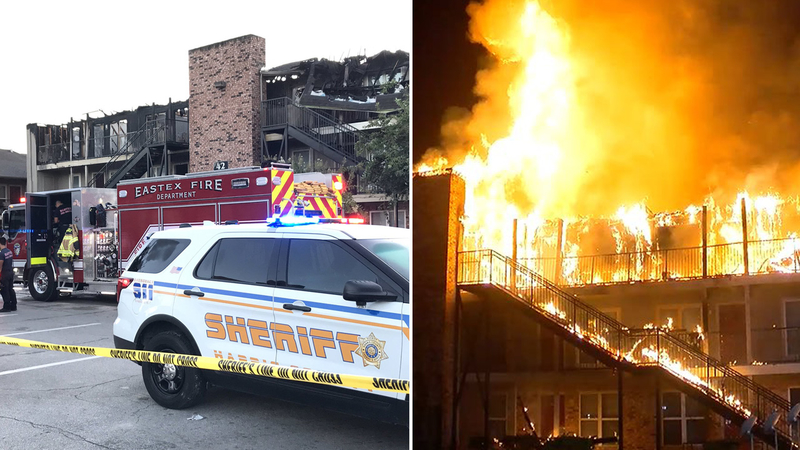 Neighbors help each other escape fire at Haverstock Hills apartments

Twenty-seven people must find a new place to stay after a large fire tore through an apartment complex in northeast Harris County. Many of them lost everything they own.

Emergency crews were called out around 1 a.m. Friday to the Haverstock Hills apartments at 5619 Aldine Bender near Lee Road.

Video from one ABC13 viewer shows large flames shooting from the roof of the apartments.

Neighbors woke each other up by banging on doors.

"Someone was banging and banging, telling us to get out and when we were trying to get out, there was fire, and pieces of lumber were falling from the third floor all the way down to the front of my door," resident Caroline Dalcour said.

Dalcour said neighbors also threw bricks to try to alert the people on the second and third floors to escape.

"It was up there in the sky, it was so high," Sharita Terrell said, describing the flames.

There are no reports of injuries.

"We got out right in just enough time," Ianna Mitchner said.

Mitchner, 18, was asleep when the fire started. Her boyfriend was awake and heard people yelling outside. He woke up Mitchner, she grabbed the couple's 8-month-old daughter, and the young family ran past the fire and down the metal stairs in the middle of the apartment building.

"The minute we hit the door, there were flames on the side of the door," Mitchner said. "I was just scared for my baby, scared for everybody."

Mitchner says they lost everything.

"I cried a thousand times, so at this point, I can't even cry anymore," she said.

Red Cross provided Mitchner diapers and formula. Volunteers are working with residents to provide hotel rooms for the 24 families displaced.

This apartment building is destroyed. 24 families lost a lot this morning. Red Cross helping residents. @hcfmo says they’ll return w dogs that can sniff out gas/accelerants. Which will tell them if someone SET the fire. #abc13 https://t.co/riNurwEzRm pic.twitter.com/NeQZDxP61t

"The only thing I got is what I have on now," Ener said.

Ener is handicapped. She can't walk without her prosthetic leg. As the fire grew bigger and bigger, Ener waited for her daughter to arrive to help her put on her leg, so she could walk out.

"She came and rescued me and got me out of the house, because I don't think anyone knew I was handicapped in there," Ener said. "I was scared. I was scared for my life."

Incredibly scary morning for Ireadair Ener. She is handicapped. Was trapped in her apartment as the fire grew bigger and bigger. Waited for her daughter to arrive. Daughter helped Ireadair put on her leg—and get out safely. #abc13 https://t.co/riNurwEzRm pic.twitter.com/LJR96uQqnN

At one point, a person was unaccounted for, but the fire marshal later said that person was not at the complex at the time of the fire.

Investigators are working to figure out where the fire started and what started it.

Meanwhile, families are trying to figure out how to move forward.

Mitchner has created a GoFundMe account to help pay for new baby clothes, diapers and formula for her daughter. If you'd like to donate, click here.

"I'm only 18 years old, so everything I built here, I did it on my own. It's hard to start all over when you're a young adult already," Mitchner said.

In the event of a fire, officials recommend knowing your way out and have a second route planned, if possible.

They also say to have a meeting place for your family, and check smoke detectors once a month.