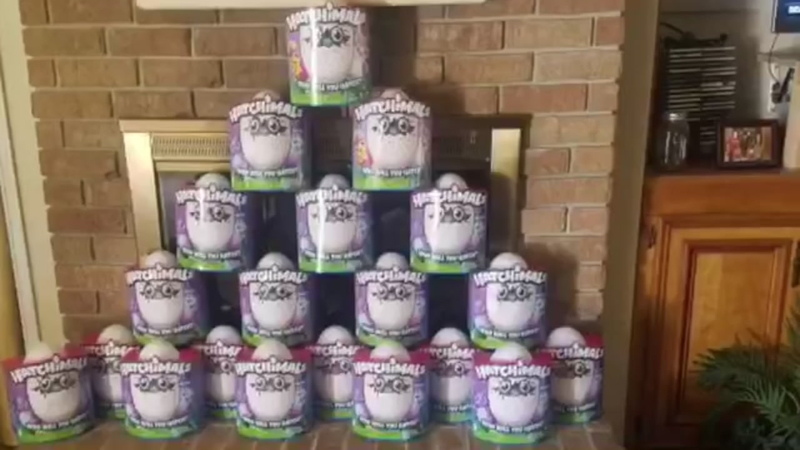 HOUSTON (KTRK) -- Many parents are still desperate to find a Hatchimal for their child. It is one of the most, if not the most, popular toy this holiday season. With stores stocking up as much as they can, some people are just out of luck.

Some parents are turning to Amazon and eBay, with the toys going for up to $300 on those sites. The retail price is actually $59.99. However, Jim B. is selling them from his Houston home for $125.

Jim said he knows that many people are unhappy with how he is selling Hatchimals for more than they are worth, but he said others are grateful to be able to buy the hard-to-find toy for their child who has it at the top of their Christmas list.

"I get a lot of ugly messages," Jim said. "A lot of people I end up selling to send me messages about how they are unable to get to the store because they live in a rural area. They tell me that I have saved Christmas for them."

Jim has purchased 38 Hatchimals at Walmarts across the area and four at Target, and he's been selling them on Craigslist. The most he bought in one purchase was two weeks ago when he got 16 from a a Walmart.

"I drive for Uber, so I was able to check stores overnight," he said.

Jim said he has been re-selling things, mostly toys, for more than 18 years. When asked if he was doing this to make a lot of money, he said, "I guess you could say that."

Jim has 12 Hatchimals left as of Tuesday.
Related topics:
shoppinghoustoncraigslistchristmastoys
Copyright © 2022 KTRK-TV. All Rights Reserved.
CHRISTMAS
Tim Allen to star in 'The Santa Clause' series coming to Disney+
What to do if you were exposed to COVID at holiday gathering
Couple dead in apparent murder-suicide on Christmas morning
These US states got a White Christmas
TOP STORIES
3 officers shot near downtown Houston, police say
Man arrested in corporal's murder is 25-year fugitive, officials say
Deputies escort body of fallen HCSO Sgt. to funeral home
Another cold front passes through tonight
Biden confirms he will nominate first Black woman to SCOTUS
Toddler credited with saving family of 7 from devastating house fire
K9 stabbing suspect accused of killing father with dumbbell
Show More
Amy Schneider's 'Jeopardy!' accomplishments reach past podium
Armed driver was trying to rob another driver on Katy Fwy, police say
These jobs are hiring, and they pay more than $14 an hour
No bond granted for suspect in Pct. 5 corporal ambush killing
Bodycam video released in crash that killed 75-year-old
More TOP STORIES News