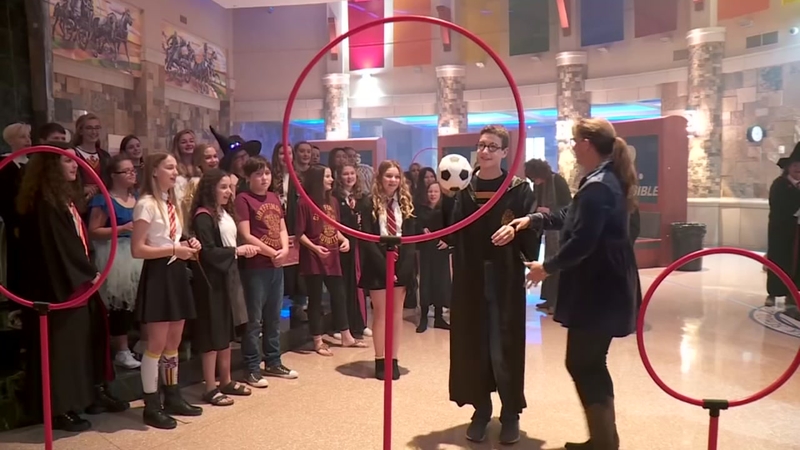 This year, he dressed as his absolute favorite character, Harry Potter.

"He loves Harry Potter, yeah. He is obsessed with it. He's always trying to teach us about it," Teague's classmate Mackenzie Robert told KFOR.

Teague is blind. He lost his vision at 5 years old.

The surprise that awaited him inside though, even a sorcerer couldn't see coming.

His parents didn't know until just a few months ago that that blindness was an early sign of a degenerative condition called Batten disease.

"One thing his doctor told us is that each morning when we get up to say and to believe that today is Teague's best day. Yesterday is gone, and tomorrow is not promised for anyone. So, we really, we really believe that," said Teague's mom, Joey Niebrugge.

Halloween morning really did turn out to be Teague's best day.

The Make A Wish Foundation recently told the family they wouldn't be able to grant Teague's number one wish, a trip to Harry Potter World in Florida.

So, his class spent the better part of a month planning this surprise.

"Good morning, Teague. Happy Halloween. We have a special surprise for you. You're going to be so surprised," she said.

Classmates dressed up as Harry Potter characters, played Quidditch in the front lobby of the school and even transformed the media center into The Great Hall from inside the Hogwarts Castle.

Everything was specially designed just for Teague, including braille name tags, so he can know who's who.

"He obviously can't really see everything, so we wanted to make everything super 'textureful' so he could really experience it himself," said one classmate.

It was fantastic and unexpected, especially in middle school, where sometimes muggles forget about kindness and compassion.

"We work on cherishing the moments and making memories that will last us a lifetime," Joey said.