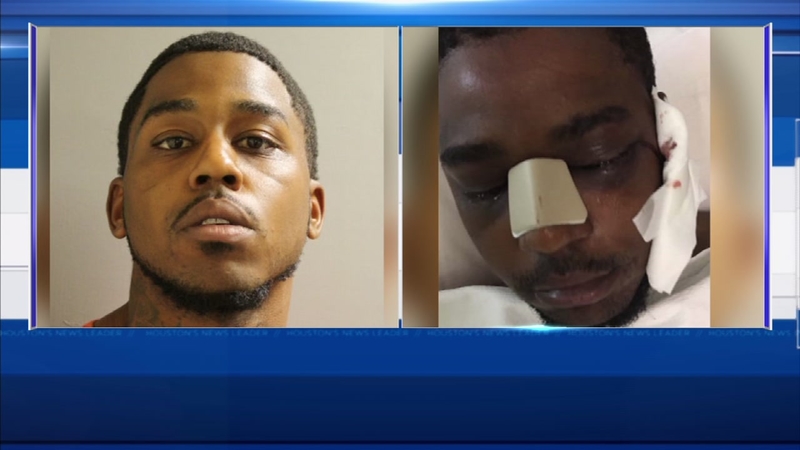 HARRIS COUNTY (KTRK) -- A month ago, Jerome Bartee was arrested on a drug and weapons charge and booked into the Harris County Jail.

Then the next day, on September 4th, Bartee's attorney says his client had a toothache and was on his way to the medical section on the jail.

On the way there, Bartee was attacked by a group of officers. The Harris County Sheriff's Office says Bartee started the altercation. Bartee's attorney says that's not the case, and the altercation was started by a detention officer.

Exclusive: inmate beaten by jailers talks to @abc13houston at 6. He tells about his broken nose, eye socket and nerve damage. pic.twitter.com/pQbE4C5LtU

In the end, both parties do agree a group of at least six detention officers attacked and beat Bartee.

Bartee sustained numerous injuries, including a broken nose, an eye socket damaged so badly surgeons had to put a metal plate in his face and facial nerve damage.

"When I had surgery they had to basically reconstruct my face," said Bartee.

The incident was caught on the jail's surveillance camera.

After the incident happened, the Harris County District Attorney's Office -- at the request of the HCSO -- filed an assault charge against Bartee for the incident. Just four days later, the DA's office dismissed the charge due to insufficient evidence.

Sheriff Ron Hickman suspended three of the detention officers accused of being involved in the assault. Sheriff Hickman says he also immediately conducted an internal investigation after learning about the incident.

The Harris County District Attorney's Office is also conducting an investigation and the DA's office or a grand jury could determine if charges are filed.

Meanwhile, Bartee's attorney just filled a civil suit against Harris County and the three officers that were placed on leave. The suit alleges that Bartee's civil rights were violated. The suit also says there's a culture of excessive force at the Harris County Jail.

"There's nobody objecting to this beating. In fact, there are people that join into this beating that doesn't happen unless there's a custom, a culture of using excessive force," said Don Kidd, Bartee's attorney.

Sheriff Ron Hickman said in a news conference right after the incident that he felt the officers' behavior went too far. He says the video shows an out of control situation.

"It shows a confrontation with an inmate, that I think escalated to a point and then from there you can see they are trying to get an inmate under control," said Hickman.

He says he would like to see officers handle situations differently when possible.

"What I talked about is a culture to go too quickly to physical. I believe that we do have training, what we don't have is sufficient tools maybe and so our goal is to provide them with other tools so that we don't go to physical confrontation," said Hickman.