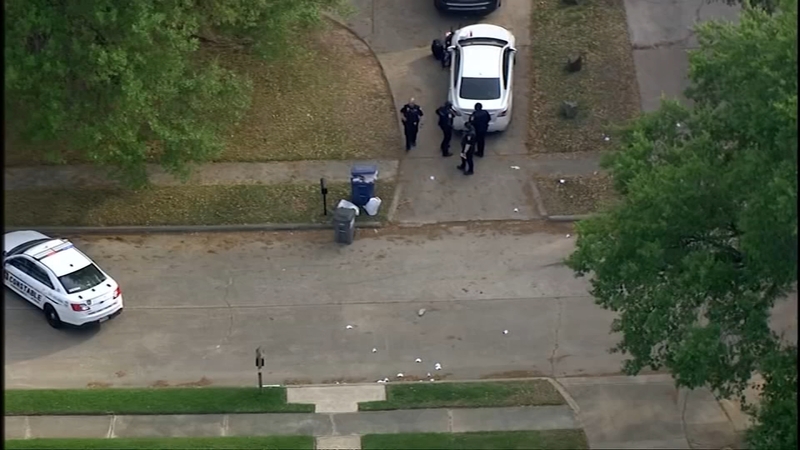 HARRIS COUNTY, Texas (KTRK) -- Investigators said they are still working to determine what sparked a massive shootout in a west Harris County neighborhood on Tuesday afternoon.

Two teens were shot and are recovering in area hospitals.

The Harris County Sheriff's Office says they were called to a home in the 15900 block of Seven Springs Drive at about 3:30 p.m.

"All you hear was 'Pop, pop, pop, pop,' and then the automatic return fire. I'm ex-military, I've heard gunshots before. I know what they sound like and they sounded big," said neighbor Darren Tamble who called 911 after hearing the gunshots.

Deputies believe two cars with several teens drove to the home for a fight with the 18-year-old who lives there.

"(The) Juveniles pull up to the house. They wanted to fight a juvenile who lives there," said Detective K.W. Koté.

Koté said the 18-year-old resident and his buddy walked out of the home, each holding a gun.

"Now, there (are) two carloads of, what appeared to be juveniles, and they start shooting all with AK rifles. Approximately 35 to 40 rounds were fired," said Koté.

Investigators said the 18-year-old was shot in the abdomen and the leg. His friend was also shot in the leg. Both of them are expected to survive.

Deputies said they are using video of the shootout to help identify the other teenagers involved.

"There were at least four people shooting at the house and two shooting away from the house, "said Koté. "The video was crazy to see in the middle of the day in a neighborhood. I'm shocked more people weren't hurt. There was a neighbor who was in a bed and a bullet came right next to her bed, but she wasn't hit."

Tamble said he is also thankful it wasn't worse.

"Just right down the street from an elementary school. If this would have happened 20 minutes later, there would have been little kids coming down that sidewalk and it could have gotten really bad really fast," said Tamble.

Other neighbors said there have been at least three drive-by shootings in the past at the same home.

Investigators confirm they've been called to the address before.

"We don't know how many holes in the house are from now and how many are from previous times, but the house has a lot of bullet holes in it," said Koté.

A total of six people were home inside at the time, the 18-year-old, his mother, stepfather and the 18-year-olds teen friend, along with two other guests.

Investigators said the parents are not cooperating.

"They've been in trouble before. I think they know their kid did something wrong and they don't want to help," said Koté.

It's unclear if charges will be filed, since very few people are willing to cooperate with their investigation.