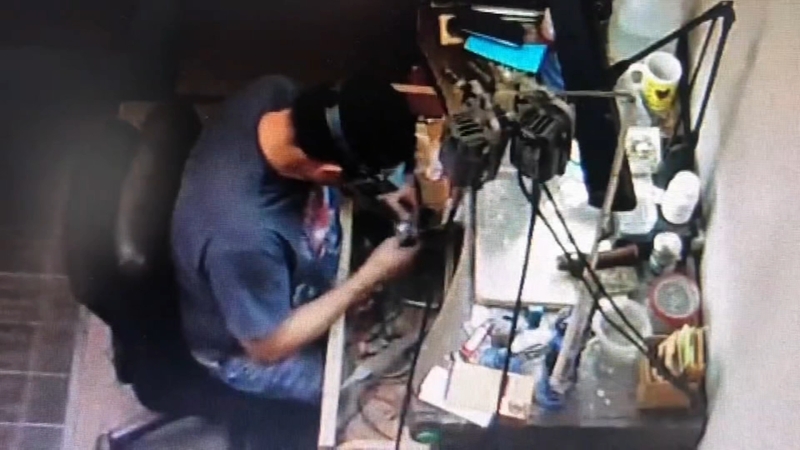 HOUSTON, Texas (KTRK) -- Investigators with the Harris County Pct. 1 Constable's Office say a man with a talent for making jewelry used that skill to swindle hundreds of victims out of their heirlooms and valuables over the course of several years.

Raul Hernandez was recently arrested and charged with theft, but investigators want to know if there are any other victims.

They say he also went by the name of Arcega Hernandez.

Investigators say he pulled off a facade of a talented, trustworthy jewelry maker, even convincing the staff of Studio 703 and Rebecca Lankford Designs to nearly hire him after his first interview.

"He was working at the bench, he did beautiful, beautiful work, we were very impressed with him," said Hannah Parker Rubin, vice president of the studio. "He was well spoken, he was well dressed, he was kind. We were really excited honestly at the prospect of hiring him."

Rubin says it was during that trial run when he was caught on camera stealing two rings brought in by a customer.

At least three people are wanted in a bold heist in the Klein area, taking more $50,000 in weapons, laptops, jewelry and even a BMW Sport Bike.

"Sure enough on the tapes, you clearly see him take the envelop that has her jewelry."

The two rings were valued at more than $10,000, but were priceless heirlooms for that client.

During their investigation, deputies learned he had pawned jewelry more than 450 times across Harris County.

Police searching for suspects who dressed as construction workers to rob jewelry store.

They say the total value of the items was worth more than $1 million.

Hernandez is currently on four years of deferred adjudication for pawning two other rings while working at the Broyles Jewelry store in Champion Forest.

Rubin says they continue to hear tales of his thefts from inside the Houston jewelry industry, saying, "We have a friend that just got a diamond back that was stolen two and a half years ago and it was found in New York."

The two rings stolen from Studio 703 and Rebecca Lankford Designs were found and returned.

"It's sad that he's a great jeweler that could have made an honest living," Rubin said.

If you believe you may be the victim of Raul Arcega Hernandez, you're asked to call the Harris County Pct. 1 Constable's Office.