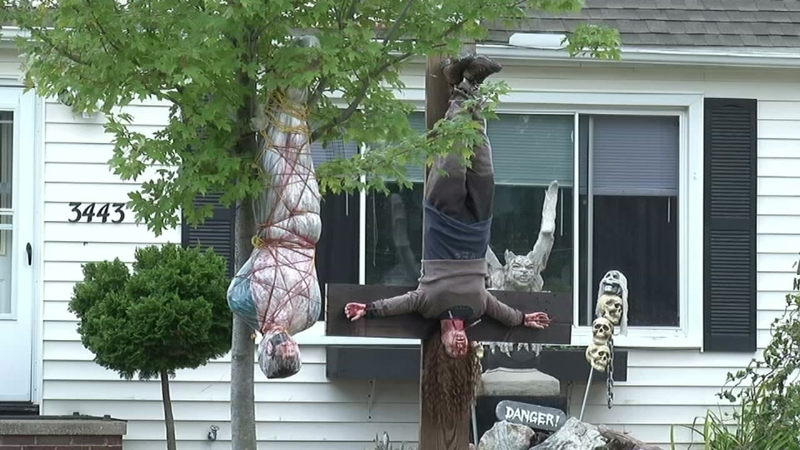 PARMA, OH (KTRK) -- A life-like Halloween display is causing some controversy in Ohio because it's located less than a block away from an elementary school.

"I felt scared 'cause I thought they were real people," a 9-year-old student told WOIO-TV after the display went up.

"(I'm) almost horrified that somebody would think that it's okay to put it that close to an elementary school," the girl's mother, Jackie Anselmo, said.

The display shows bodies that appear to be graphically murdered in the front yard of the home. Anselmo and other parents say it's not appropriate to have that kind of display just feet away from a school.

But the city says there's nothing it can do about the display because it represents freedom of expression.

The homeowners say the display is just meant to be for fun, and they claim they've not had a single complaint.

"We don't want to scare kids. We just want to do the Halloween fun of it but definitely no ill intent, no," homeowner Vicki Barrett told WOIO-TV, explaining that she has young kids of her own who are fine with the display.

She did say she would be willing to "tone it down" if she learns it's scaring too many school children.
Related topics:
home & gardenhalloweenschoolu.s. & world
Copyright © 2022 KTRK-TV. All Rights Reserved.
TOP STORIES
Harris Co. judge accused of unlawfully arresting former TV journalist
Big rig lands nose-first into construction hole in west Houston
Burn ban in effect for unincorporated parts of Harris County
HPD responds to reports of threat at Ben Taub hospital, police say
Gulf disturbance up to a 40% chance of development
81-year-old missing for nearly week in need of medication, family says
50 migrants die after 18-wheeler abandoned in Texas heat
Show More
A glance at migrant smuggling deaths globally since 2000
Abortions before 6 weeks allowed to resume in Texas after court order
The Alley Theatre to be renamed after receiving anonymous $25M grant
Major crash blocks all lanes of SH 35, south of FM 518 in Pearland
Advocates believe migrants dead in 18-wheeler were headed to Houston
More TOP STORIES News