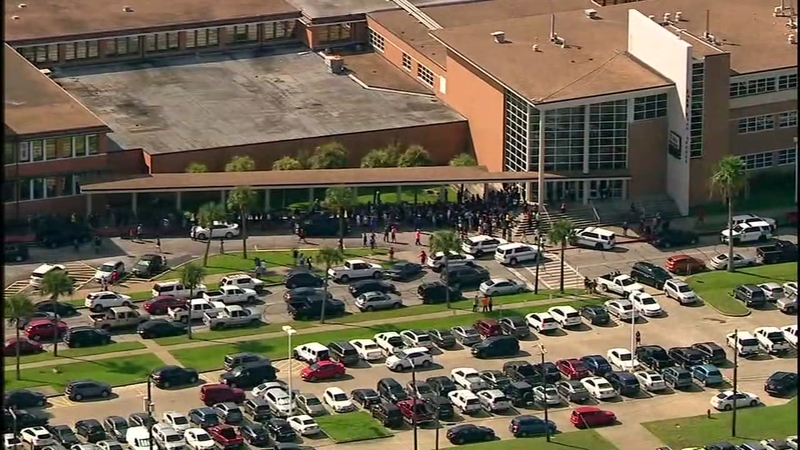 GALVESTON, Texas (KTRK) -- It was a wild morning at Ball High School in Galveston after a student was arrested for bringing a gun to school.

The campus was placed on a precautionary lockdown, and frantic students called their parents to pick them up.

"I was shaking and crying because I've never been in this situation before," student Alexis Crich said.

School officials said that a concerned student made a report about a possible weapon on campus.

Some students tell me the first thing they thought of when they went on lockdown was Santa Fe. Victoria Mallard has a quite a few friends who go there. pic.twitter.com/6APNfSBkI2

"We were in second period and one of the administrators came over the loudspeaker and said, 'We are in lockdown. This isn't a drill," student Janae Girard said.

Officials say a student with an unloaded .25-caliber handgun was taken into custody at 9:58 a.m.

Once parents were alerted, some of them rushed to the campus to pick up their children.

"It wasn't a hard decision. As soon as we heard there was a lockdown, we hopped in the car and came down," parent Gary Crich said.

"Anytime something like this happens, we immediately go back, we debrief and we have an after-incident review," Galveston ISD communications officer, Dyann Polzin, said.

The identity of the student has not yet been released.

The student was taken into custody and criminally charged with a third-degree felony and incarcerated as a juvenile, according to the Galveston ISD superintendent. Four additional students are being questioned and considered persons of interest.