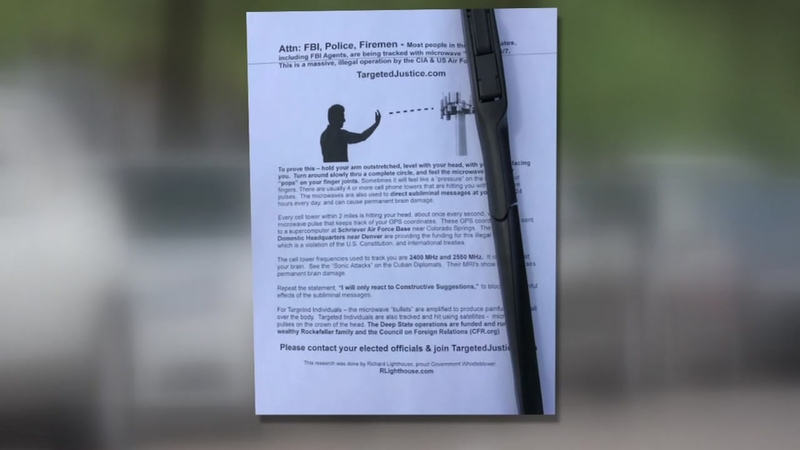 HOUSTON, Texas (KTRK) -- The Harris County Sheriff's Office is continuing to follow leads into a flyer that was contaminated with Fentanyl.

Investigators say flyers were found on 11 or 12 vehicles. Some of the vehicles belonged to civilians, but others were on unmarked HCSO vehicles.

Investigators say one flyer tested positive for Fentanyl in a field test. The other flyers were not tested in the field, but were instead taken to the Harris County Institute of Forensic Sciences, where they will receive a more comprehensive test.

A deputy who came into contact with the laced flyer was released from the hospital and is recovering at home.

The organization listed on the flyers, Targeted Justice, says it had nothing to do with incident. They believe that the flyers were printed off of their website.

They sent a statement, saying in part:

"Targeted Justice is a human rights organization. We stand for the US Constitution and the American values of life, liberty, and the pursuit of happiness and the importance of the inalienable rights of the individual. We stand against cruelty, violence and injustice wherever it comes from, even from a perversion of authority. We thus far have a membership of over 500 and are growing. All are victims of a staggering range of human rights violations, and as such, we do not endorse any activity that could endanger or harm another human. We were quite relieved to hear that the officer who allegedly came into contact with a tainted flyer bearing our information, is perfectly fine. We are awaiting more information as to who may have printed off the flyer in question from our website, where it is readily available to anyone. And who, if anyone may have somehow put a noxious substance on it for unknown purposes, which we have been informed is a common street drug, common in any police or sheriff's department evidence storage.

When an organization puts together an informative flyer it is not logical to scare people away from reading it. We can only assume, this was a desperate move done to censor information the public needs to know for its own safety.

In regard to our group being reported as antigovernment, it is truly alarming to see people in the press jump to illogical conclusions without consulting anyone in our organization. Our core, founding members are spread all over the country and are a combination of entrepreneurs, two Federal workers, one retired, an older legal student on his second career, and other highly educated professionals. I personally spent my career as an intelligence analyst with the National Security Agency, so dedicating one's life to the protection of one's country can hardly, logically or correctly be called anti-government.

We await a full and complete investigation of this incident and support the prosecution of anyone who would harm an innocent person. At this point in time, members Ella Free and Karen Stewart are the only members authorized to speak for Targeted Justice."

The flyers were found on several patrol vehicles outside the station on Lockwood.

"She picked it up and didn't think anything of it, but as she drove to her destination she began feeling a little bit lightheaded and having a few other symptoms," said Sheriff Ed Gonzalez described the deputy involved in the incident.
EMBED More News Videos

One link on the Targeted Justice website allows anyone to download the same exact flyer that was found all over the deputy vehicles.

URGENT: Flyers placed on the windshields of some #HCSO vehicles this afternoon at 601 Lockwood have tested positive for the opiod Fentanyl. One sergeant who touched a flyer is receiving medical treatment. Call authorities if you see these flyers and DO NOT TOUCH. #hounews #lesm pic.twitter.com/1mp03U8OGn

The tough part for investigators is that it could have been anyone who printed and passed out these flyers. The only clues on the flyers themselves may be fingerprints.
"Someone could have died. The fact it is now being used against officers is a game-changer," said Harris Co. Pct. 1 Constable Alan Rosen.

Several other local law enforcement agencies are trying to stay on top of the game by arming officers with Narcan, an emergency treatment used for opioid overdoses.

The encounter with Fentanyl can be deadly even if found on a flyer and absorbed through the skin.
Report a correction or typo
Related topics:
houstonfentanyltexas news
Copyright © 2021 KTRK-TV. All Rights Reserved.
More Videos
From CNN Newsource affiliates
TOP STORIES