Body of groundskeeper found in pond at Hockley golf course 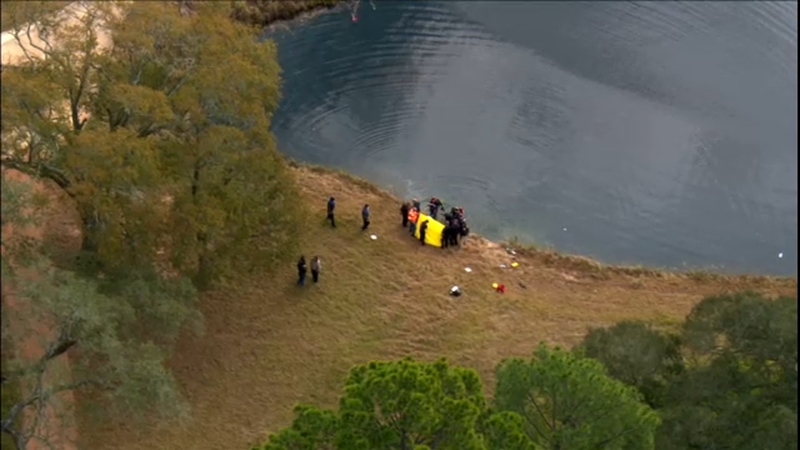 HOCKLEY, Texas (KTRK) -- The body of a groundskeeper was recovered from a golf course pond Monday morning in Hockley.

Authorities in Waller County said a dive team was called to assist at The Clubs at Houston Oaks on Hegar Road.

According to the chief, the groundskeeper, identified by the club as 59-year-old Agustin Rojas Canchola, was using an ATV to get around the course as he was setting up tee markers.

At about 7 a.m., Canchola apparently lost control of the vehicle. Club management said the vehicle reportedly veered off the cart path and down an embankment into a pond on the golf course, fully submerging both operator and vehicle.

A few hours later, divers were able to recover Canchola's body. The official cause of death was determined to be drowning.


Here's the full statement released by the club's general manager/CEO Bob Gusella:
"A tragic accident occurred on the golf course at The Clubs at Houston Oaks this morning resulting in the fatality of a valued long-time golf course maintenance associate, Mr. Agustin Rojas Canchola, of Waller, TX. The official cause of death was determined to be drowning; specific details of the cause of the accident are not fully known at this time. Mr. Canchola was 59 years old. We appreciate the services of emergency first responders from Waller and Montgomery Counties who reported promptly to the scene of the accident shortly after 7:00 am this morning.
Mr. Canchola apparently lost control of the utility vehicle he was driving while performing morning duties. The vehicle reportedly veered off the cart path and down an embankment into a pond on the golf course, fully submerging both operator and vehicle. The location of the submerged vehicle was not immediately apparent to first responders, and a dive team from Montgomery County ESD was deployed to assist with the investigation. Divers were able to locate the vehicle and recover the body of the operator, who was deceased. We mourn the loss of our longtime associate and co-worker and offer heartfelt sympathies to the family, friends and co-workers of Mr. Canchola at this very difficult time. We also request privacy for his family as they grieve amidst this unexpected loss."
Report a correction or typo
Related topics:
hockleyatvsearchwater searchbody found
Copyright © 2022 KTRK-TV. All Rights Reserved.
TOP STORIES
Timeline breaks down Uvalde shooter's movements day of massacre
Protests planned against NRA meeting following Uvalde deadly shooting
3 dead in apparent murder-suicide in NW Harris Co., sheriff says
TX school shooting leaves at least 19 children, 2 adults dead
Our coolest morning in nearly a month
Here's what to know about NRA meeting in Houston
Uvalde school shooting: What we know about 19 kids, 2 teachers killed
Show More
Beto O'Rourke confronts Texas gov. at Uvalde shooting press conference
Houston mayor after shooting in Uvalde: 'Our values are messed up'
HISD staff encourage talking with kids about Uvalde tragedy
Where do Texas gun laws stand?
Mother of Houston Olympic champion receives donated food truck
More TOP STORIES News