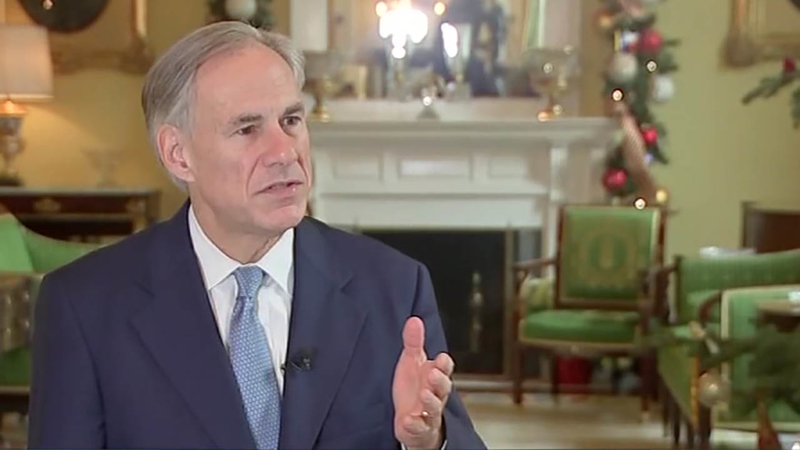 AUSTIN, TX (KTRK) -- The eighty-fifth Texas legislative session begins on January 10. Ahead of its start and before the holidays, Governor Greg Abbott sat down with Eyewitness News to discuss his priorities in 2017.

Governor Abbott says he has four priorities for the upcoming session that stretch across the issues -- tests he'll apply to every bill that reaches his desk.

"One, does the law improve freedom and individual liberty in the state of Texas?" he said. "Two, does it provide economic opportunity? Three, does it advance educational opportunities? And four, does it make the state safer and more secure?"

This is Abbott's second legislative session as governor. With one under his belt, he says he's confident Texas is staying on course.

"One of my primary goals as governor is to make sure that our economy does continue to grow and that we continue to add jobs," he said. "Part of it is attracting jobs in the energy sector and part of it is to attract jobs in all of the other sectors."

.@GovAbbott talks education ahead of the next #txlege See more on LIVE AT FIVE on @abc13houston pic.twitter.com/tFasxD675q

That includes exploring export deals with other nations. Abbott says Texas is rich in energy, agriculture and cattle. He is also trying to lure corporate headquarters from other states to relocate in Texas.

During our exclusive interview with Governor Abbott in the Governor's mansion, we asked him about a variety of topics including immigration and so-called sanctuary cities. Those are municipalities that don't enforce federal law regarding illegal immigration.

"Banning sanctuary cities is a priority," he explained. "We live in a nation of laws. People are, and especially government bodies, are expected to follow the law, not flout the law."

We also asked about the Obama Administration ruling that prevents states from defunding health service providers like Planned Parenthood for providing abortions. Texas is one of eight states to strip that funding. The governor thinks the ruling won't hold and he doesn't plan on changing his position.

"Our goal is to make sure in the state of Texas we do all that we possibly can to protect innocent life," he said. "We've seen the Obama administration use his last months in office to issue all kinds of dictates, many of which are going to be overturned on January 20, President Trump's first day in office."

Also newsworthy on Wednesday, President-Elect Donald Trump's appointment of Abbott's predecessor, Rick Perry, to lead the Department of Energy. Critics of the choice contend Perry doesn't have the knowledge or experience in the energy sector or in research to lead the agency.

"Now we have a voice of reason, a voice that will be promoting the energy industry and reducing regulations; complying with the law instead of making up the law," he said. "And so I view the appointment of Governor Perry as the Secretary of Energy as one of opportunity for the energy sector for America."
Related topics:
politicstexas politicstexas newsgreg abbotttexaselection
Copyright © 2021 KTRK-TV. All Rights Reserved.
TOP STORIES
Man found shot to death in his car along North Fwy at I-10
Man accused of attacking 3 women at same Houston apartments
Texas' ban on mask mandates in public schools back in place
Charities say rising costs mean less donations for children
1st case of omicron COVID variant identified in US
Neighbor shot by former Sugar Land officer may face assault charge
Houston hospital system days away from losing Medicare contract
Show More
Houston parents duped by deceptive Elf on The Shelf seller
2 injured outside corner store during shooting in SW Houston
Minorities facing higher AIDS transmission rates especially in Houston
Families turn down Travis Scott's offer to pay for funerals
4th student dies in MI school shooting, alleged gunman ID'd
More TOP STORIES News